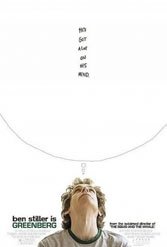 After a stint in a psychiatric facility, 41-year-old Roger Greenberg (Ben Stiller) house-sits wealthy brother Philip’s L.A. home while brother, wife and children head for an upscale vacation in Vietnam. Roger is troubled, selfish, and chronically rude. He’s a one-time rocker whose ego cost his band a chance at the big-time. Now he’s a carpenter taking an indefinite time out from life. He spends most of his time writing rude complaint letters to companies he thinks short-changed him.

Stuck in L.A. limbo, he starts a relationship with his brother’s sweet but naïve personal assistant Florence (Greta Gerwig), 15 years his junior. She possesses all the decency he lacks, producing the kind of abusively resentful relationship that often arises when low self-esteem collides with unfettered affection. It’s hardly goes better with old rocker friend Ivan Schrank (Rhys Ifans), who kicked drugs to start a family. Schrank urges Greenberg to grow up. Greenberg resists — convincingly (“Life is wasted on people.”)

Director Noah Baumbach’s (“The Squid and the Whale,” “Margot at the Wedding”) literally painstaking portrait of a sick man trapped in a kind of eternal adolescence profits from fine performances by those hurt by his callousness, namely Florence and Ivan. Pokerfaced Stiller handles Greenburg’s self-indulgence with ramrod calm, occasionally showing vague signs of kindness.

Ultimately, though, everyone’s wheels are left spinning because the film’s unlikable centerpiece drags all around him (even a sickly German Shepard) into a black hole.