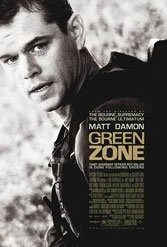 The stylishness British director Paul Greengrass brought to bear on two Bourne Franchise films is gutted in this superficial thriller about origins of the Weapons of Mass Destruction intelligence used by the United States to justify its invasion of Iraq. Greengrass’s Bourne films adroitly distributed weight between character and action, a balance that deserts him in Baghdad.

The story opens with Army Chief Warrant Officer Roy Miller (Matt Damon) complaining to his superiors about coming up empty on WMD searches. No one seems to care, least of all Clark Poundstone (Greg Kinnear), an American bureaucrat loosely based on U.S. transition chief L. Paul Bremer. After an incidental run-in with an Iraqi civilian, Miller becomes convinced that Poundstone not only misrepresented a secret prewar conversation with an Iraqi general (codenamed “Magellen”) but also made up the WMD threat from whole cloth to create a media frenzy, betraying Iraq’s potentially helpful officer class in the process.

But the intellectual buck stops there, since Greengrass chooses counter-propaganda over fleshing out the players. Poundstone never rises above caricature (he grinningly applauds George W. Bush’s infamous May 2003 “Mission Accomplished” speech) while Washington’s Iraqi lackey Ahmed Chalabi, a murky but vital figure, is introduced but never defined.

Mostly, it’s the dogged Miller (with an assist from the murky CIA) pitted against Poundstone-dispatched Special Forces in a race to track down the Iraqi general. The truth-hunters want him alive; the liars (and others) want him dead. Assertions are heavy-handed. From the general: “Your government wanted to hear the lie, Mr. Miller…”; from the civilian: “It is not for you to decide what happens here.”

Though the film takes its cue from Washington Post reporter Rajiv Chandrasekaran’s acclaimed 2006 “Imperial Life in the Emerald City,” which examined the Bremer-led transition, Greengrass sticks by his simplistic storyboard. Given the controversial subject matter, the choice seems at best ill-advised and at worst disingenuous.