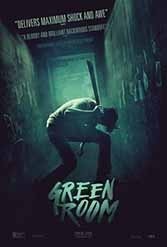 In Jeremy Saulnier’s gratuitous bit of B-movie mayhem, a fledgling and penniless East Coast punk band that’s traveled to Oregon for a gig that doesn’t pan out finds itself playing in a rural white supremacist “club” run by some very bad men who deal heroin and keep kill-on-command attack dogs (the band doesn’t help itself by opening with a number called “Nazi Fucks.”)

When the visiting quartet inadvertently stumbles on a dead woman, the cover-up minded locals decide its time to nix witnesses by going paramilitary. This means death by attrition for our hemmed-in rockers. The leader of the extermination team is hateful owner Darcy (a semi-cameo by Patrick Stewart), whose principle function is to decide just how to ensure none of the wandering minstrels gets out alive.

There’s a catch, of course, when the band, or what’s left of it, tries fighting back. But just what purpose this dank and claustrophobic thriller exists to exalt is anyone’s guess. Is that there are lurid militiamen in Oregon’s forests or that rocker chicks can play dirty with knives and guns? That grunge deserves a grungy movie? Who knows? Whatever it is, welcome to 90 minutes of escalating violence shrouded in darkness without a hint of a substantive soundtrack. Nothing here makes good on the promise showed by Saulnier in 2013’s “Blue Ruin,” also about escalating violence but far more cogent. “This is a nightmare,” says one band member. Got that right.