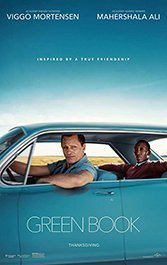 From the beginning we know that Don Shirley-Doc (Mahershala Ali), an aloof, reserved, highly educated, virtuoso black pianist on tour in the Midwest and deep South in 1962, and Tony Vallelonga-Tony Lip (Viggo Mortensen), his outgoing, working-class, white driver-body guard, will find common ground. You want that to happen, and it does, in classic Hollywood feel-good fashion, no holds barred.

In its trajectory and emotional valence, “Green Book”— the film’s title is that of the booklet that listed establishments where blacks could safely sleep and eat in the segregated South—recalls the king of feel-good films, “It’s a Wonderful Life” (1946). There, an angel convinces a suicidal George Bailey (Jimmy Stewart) that he has lived a meaningful life, that he is embedded in a community that values him. Tony’s task—he’s the “Green Book” angel — is to reveal to Doc the extent of his isolation, even from his own black culture and heritage, which Doc has commodified with African artifacts and dress, and to introduce Doc, figuratively and actually, to Tony’s boisterous, organic, supportive, working-class Italian community.

Doc learns from Tony about fried chicken (one of several hilarious scenes), Chubby Checker, the black roadhouse, and the satisfactions of indulgence; and Tony, through Doc, comes to appreciate literacy, civility, honesty, dignity, and self-control. Race is at the core of Tony’s transformation, and it’s accomplished in two ways. His hard-core racism, established in an early scene involving water glasses, quickly and all too easily becomes a much less incriminating form of racism, characterized by Tony’s use of racial stereotypes. Later, Tony encounters the vicious, demeaning system of segregation, and he undergoes a second, more meaningful change, as he comes to understand what Doc is going through.

This exchange of values and attitudes could be cloying, but here it’s accomplished with grace and humor, thanks to luminous performances by Ali and Mortensen (Oscar winner and nominee respectively) that build chemistry between the protagonists. The film’s historical setting also lends credibility and even nostalgia to its personal transformations, because the audience knows that there is racial progress on the horizon. Like “Hidden Figures,” the 2016 film that told the story of black women mathematicians at NASA into the 1960s, “Green Book” is “inspired by a true story,” in this case co-written by Tony’s son, Nick Vallelonga.

Despite its many virtues, “Green Book” isn’t perfect. At a few points one wishes that director Peter Farrelly had been somewhat less obvious: the “good cop” scene, the black field hands pausing to observe the black man in the back seat of a Cadillac, and the too-timely entrance of the Jewish pawnbroker in the film’s last moments. More importantly, in insisting that Tony has community and Doc doesn’t, the film begs the question of how Don Shirley could be so alone, bereft of friends and family. Wouldn’t he at least be part of a community of other black elites, or of other talented musicians?

The other side of that social equation — the celebration of Tony’s community—might be understood as invoking the tribalism (the white tribalism, even) that’s central to today’s contentious, racist, anti-immigrant Trumpian political culture. Better to put that disturbing idea aside and give oneself over to the ample pleasures of this captivating film.