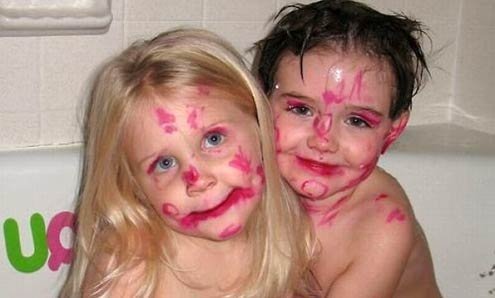 You're suddenly a bi-polar person responsible for other human beings...
G

reat Expectations. That’s what we parents start out with. Not the Dickens novel but the idea that our children and our newly created families will somehow be magical, wonderful, even extraordinary. Mother Nature pumps new mothers full of oxytocin. For me at least, its release was like what I imagined heroin to be for addicts (it also had me begging the question: “Why didn’t I become a wet nurse?” As long as you’re lactating, you’re swimming in the stuff.)

Beginnings can be great, and with them come the expectations. Middles and endings are when things get tough and bars get lowered.

Once my oxytocin levels subsided, I was miserable. This is a mommy taboo we’re not supposed to talk about. You stop breastfeeding and it’s BAM, good bye hormonal high; hello rock bottom. Parenting suddenly becomes like a 12-step, day-at-a-time program. Only once my hormones were back in check did the real work of sober parenting begin.

Parenting is like taking a trip. The heightened reality begins the moment you buy your ticket and lasts until you unpack your bags. Emotions are higher. Experiences are richer. The pain feels more biting. The joy seems manic. You’re suddenly a bi-polar person responsible for other human beings. You’re a mental patient trying to mold a sane human being. Which can be difficult.

Last week a girlfriend called me at 8:12 a.m., which is earlier than our usual chats.

“What’s wrong?” I ask without even saying hello.

She began a 60-second rant essentially ratting herself out as a bad Mommy. She’d been on the bus with her two crying preschoolers. It had not gone well.

“I told him 12 times to put his shoes on. I lost control. I told him to shut up. I should have held it together… I bet Lorraine has never told her kid to shut up… Is it bad that I can’t stand my children right now?”

“It’s okay,” I reassured her. “It happens to the best of us.” It has definitely happened to me.

But she insisted. “Do you think Lorraine has ever told her to kid to shut up?”

“No, I’m sure she hasn’t.” Lorraine is a very put together, striking, smart, and calm mother of one.

Then came comments about exhaustion and sleep-deprivation. Even our regularly scheduled dinner suddenly seemed at risk. That part, thankfully, was rescued.

Every two weeks, five mothers of preschoolers, including my friend and I, meet at an Indian restaurant in Rome. The evenings help me stay sane, let me laugh, and also offers up tikka masala.

I arrived first, as usual. Second was our friend the psychiatrist.

“Me too!” We replied jointly.

Then came the two British girls. They, too, knew the secret code. “We’re exhausted.”

Unlike parenthood, our dinners begin at a low point. Laments come first. Then the games begin. Our evenings are fun, effortless and sometimes salacious. No topic is too hot. Boob jobs. Potty training. Libidos. Fantasy vasectomies. Vomit. Politics. Schooling. Jail terms (no felons at the table; we do have standards).

We’re a good mix the five of us. We’re open-minded, non judgmental and honest. We lift the lid off of motherhood’s dark trash bin. Then comes the evening’s most cathartic moment: “the confessional.”

Phone call girlfriend explained her morning motherly misstep. The kids did not listen. Tempers flared. Kids cried. She apologized. She wrapped it up by telling Lorraine, “I’m sure you’ve never told your son to shut up.”

Here was a perfect cue for Lorraine to look like Supermom. She just had to nod. But she didn’t. She came clean. “I told me son to shut it last year!” she said with her beautifully rounded British vowels. “And he proceeded to tell me to ‘shut it!’ every chance he got for the following six months!”

Halleluiah! Each of us had bad mothering moments. Even the psychiatrist, otherwise cool, calm and collected, copped to having child-induced temper tantrums.

“I didn’t love my child at first sight. I had to get to know him.”

“I felt isolated and alone… and I had no idea what to do with a kid.”

“My maternal side didn’t kick in immediately.”

“I had no interest in my husband.”

To lighten things up, I told them that I locked my kids in the closet for days on end. (But this is Europe; we have no closets.)

Even the deepest conversations have a light side. The telling of these tales makes for shared recognition that provides a connection which helps lift our spirits, alleviate guilt and move on to being better mothers than maybe we were the day before.

Sometimes, all it takes is a simple “me, too,” and a chicken curry. And maybe lower expectations.