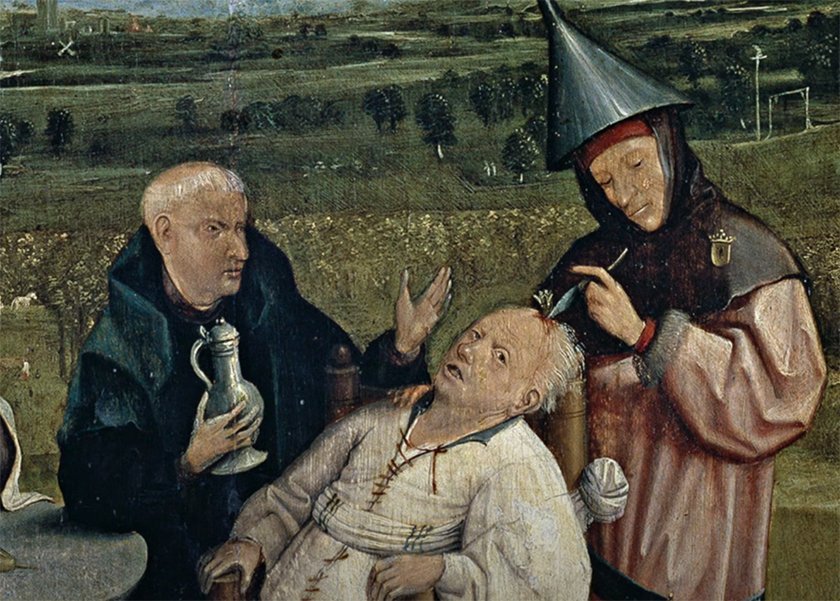 When it comes to medical methods and the presence of hospitals, the last century has overturned a bleak history.
T

o be hoisted by one’s own petard is an archaic if colorful little way of suggesting being burned by one’s own assertions or actions. They might have seemed almighty and right at the time, but that time no longer applies. Reality does. As in building ocean liners billed as officially unsinkable that go down on their maiden voyages or calling young Mozart a misfit only to then live in the shadow of his acclaim.

Life plays tricks. So does progress, for more than a century billed as both inevitable and necessary, and therefore good — because all that is new is good, or so the modern world posits.

Here then is a little aside, intended as a petard of its own.

For centuries if not millennia people were born and died at home, whether home was their home or a battlefield or some lost spot in the countryside.

If they came to become sick, they were treated by those who called themselves medicine men or healers, later physicians, but aside from the very wealthy few ever left the confines of their home once they acquired the illness that would kill them, aside, say, from a walk in the park.

Death was a private matter, more public in war and a form of entertainment when it came to executions.

If you became cripplingly ill, you were almost literally dead in your tracks, the property of your kin, who would decide whether to care for you at their expense or expel you if they thought your illness put all at risk. It was not a particularly complex equation. There were no emergency rooms.

Hospitals, in fact, were largely a 20th-century phenomenon, their building coinciding with the progress (that word again) of medicine and the expansions of its commercial potential.

But after World War II hospitals, particularly American hospitals become a central feature of global culture — a rescue spot for the ailing and one of many ways of differentiating Western democratic, capitalist culture from that in communist countries, still largely far afield from the hospital movement. Many still died at home. Even data on deaths was scarce.

Not in the West, which groomed a culture of hospitals and hospitalization so vast many came to believe that no matter what happened, “hospital doctors” would intervene to repair any broken or ailing Humpty-Dumpty. First came the ER, after which you dwelled in a room with nurses and attendants — or so pop culture suggested, with TV gorging on medical dramas from the 1950s forward.

Many came to believe that “hospital doctors” would intervene to repair any broken or ailing Humpty-Dumpty.

Revived Europe followed America’s model and advertised both doctors and hospitals as a feature of culture’s protective layer: no more death in the stables near your horse, or death alone by plague in a boarded up house, or even death by accident in a work fall. The hospital now had the tools of repair, at least in most cases.

But 2020 has seen the petard exploding in a way that makes unsinkable ships seem silly.

People are locked up in their homes all over the world because an infectious disease has stricken so many residents of the medically sound world that it lacks the hospital beds to harbor them. In fact, some sick have been turned away, as if to make 2020 seem like 1630, at least in the minds of those brought up with an expectation of hospital care.

It is not the disease itself that has caused and is causing the chaos in which the developed world now lives, but the failure to imagine a situation in which this vaunted medical and hospital system would be so taxed as to actually dismiss some severely ailing but non-critical patients to make room for those seriously afflicted by the new and unexpected disease, COVID-19, and for that reason above all others — modern hospital administrators are both impressionable and media savvy — seen to require immediate and urgent treatment. They face scrutiny as never before.

Let us for a moment pause to sketch out a hypothetical pre-1900 scenario involving the existing corona virus. Then as now, it would have sickened the few who would then have infected the many. But that is where any comparison ends.

In the pre-“Titanic” world, the asymptomatic would have continued to work, and some of the ill also. Only the deeply ill would have remained housebound, some recovering, others stricken for weeks, with some dying of extreme pneumonia-like symptoms. The elderly and the frail, already at home (and many afflicted with then-unchecked diseases), would have been savaged — as in fact they have been now, with the average virus mortality age slightly over 80, which in the 19th-century would have been considered as a “ripe old age” or a “full” lifetime, as a result somewhat less eligible for latter day lamentation.

All in all, millions might have died, but social and commercial life would have continued in its normal framework since there was no emergency “escape hatch,” medical or moral, to prompt a change in course. Endurance was the only course.

Later, the malady would have been dubbed “The Great Virus of 1899,” like a blizzard, or simply recorded as a time in which a vicious, flu-like malady had its way with the population. The widespread (and expected) intervention of medical expertise and hospital care would not have existed to create a matrix of responses to the illness. By the same token, those who now trade in panic would have lacked the underpinning necessary to induce it, since lethal illness usually came and went on its own terms. Again, the infected, many of them poor, would have worked through their ailment as best they could, or perished from it without much medical (and journalistic) mitigation — as is still the case in underdeveloped areas of the planet.

In wartime, anything but hypothetical, the worst of the wounded died on the battlefield. Many were not even moved from where they lay dying. Life and death choices were based on severity and hospital capacity. No place could take in an infinite number of wounded, and all soldiers knew this. You were expected to know this and prompted to be brave, but not all managed.

Some in agonizing pain asked for and received large morphine doses so as to have a “better” death.

Today, the concept of dying at home, dying alone, becoming sick and dying without the intervention of emergency medical staff is not only unthinkable but immoral. It speaks badly of a society and suggests it is unable to care for its ailing, especially after more than a century worth of medical advances and promises of comfort, even if treatment ultimately fails and death results.

Even governments wish wars, should they occur, to be without substantive casualties, carried out when possible using drones and missiles, with human troops a last resort since death is less socially tolerable even in combat.

What societies and governments are dealing with now, though they refuse to acknowledge it, is fallout from an over-promising of relief, with promise and relief taking the specific form of a hospital bed made available to all no matter what.

The underdeveloped world made no such promises, and in many instances still resembles the pre-industrial age the West left behind to embrace the “solace” of hospitals with the expectation of redress.

That solace and expectation of redress has been wrecked in a matter of months, the modern and unsinkable vessels going down one country at a time as virus cases ebb and flow, at times lurching upward, as a result further disabling social culture because unlike a century ago life cannot be allowed to go on in the presence of mass sickness because to do so would be unethical and intolerably anti-modern. “Be brave” is not an option, nor is an acceptance that the elderly often find themselves in the natural selection trenches when a mysterious new malady appears. Ah, but this is 2020. From the trenches they should be removed to ready-and-waiting places of treatment, the landmarks of a new age in which life between ages 80 and 100 is not only expected but in some places already a commonplace. Old-age fatalism plays no role in this eminently medical world in which (again hypothetically) grandpa has no business dying at 90 since to do so would annoy him as well as rattle his coming-of-age grandchildren.

What then to do if you are an enlightened society but lack places in which to put your ever-mounting numbers of sick, who as never before expect to be placed? You do what some medieval villages did: you lock up all in hopes this will slow the spread of the contagion, and meantime work to make hospital beds, bulwarks of modern social entitlement, available to all who need one.

What to do if you are an enlightened society but lack places in which to put your sick?

The matter becomes all the thornier for the worst cases, those now turned over to Intensive Care Units, which have even fewer beds. Far more than the hospital, the ICU is a mid-20th-century product, and yet another piece of the implied medical promise. Life, liberty, and the pursuit of happiness also comes with an ICU in the event happiness gets sick, all the more likely as the developed world’s population grows older and older, its frailties more extensive. The average age of the victims of this virus is 82. In 1900, a sick 82-year-old man would have been deemed to have lived a long life and left to his own devices. This is what made the Spanish flu immediately after World War I so crushing: it killed mostly the young. But most of those young victims died in their cities and towns, or farms. Many died while under quarantine. As they weakened and their symptoms worsened, they were cut loose as lost.

Progress cannot tolerate this, rebelling as a child might to an unwanted food. It regurgitates the prospect of anyone left to their own devices in the midst of a global malady. To not be able to tend to the sick is a loss of face such a global malady places front and center, not the case with the millions of individual deaths in “normal” times, many slow and horrific because health care systems can at times be insensitive to individual cases or the needs of individual families. To say this virus has elicited more than one medical hypocrisy is an understatement.

Thankfully, vaccines are on the way, and progress will yet again likely win the day. No vaccine has ever been produced so swiftly.

At the same time the virus should serve as a huge cautionary tale to a part of the world that has gotten used to providing solutions to all that ails its citizens, in particular allowing them to communicate almost instantly, including the communication of sudden sickness. All seemed covered, even if many had no insurance. They sensed an implicit insurance in the existence of hospitals, imagined as endlessly capacious, ready to tend to the worst of the worst any reversal could offer.

This advertising turned into something of a legend, a health backup imagined as somehow larger than life.

And then the latest “Titanic” set sail.

About the Author: David Amory