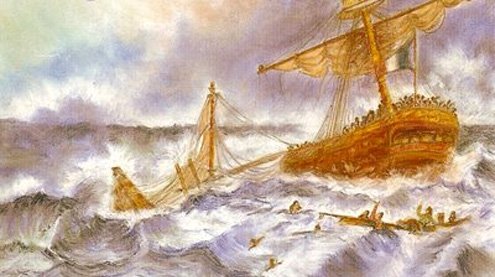 In 1855, the French warship "Sémillante" headed from Toulon to Constantinople struck a reef and sank, claiming 750 lives.
&

#8220;Natale con i tuoi, Pasqua con chi vuoi.” Christmas, the adage goes, you spend with family; Easter’s up to you. But for those of us stuck in Bonifacio, Corsica on stormy Easter the words didn’t translate into French. Outside, hurricane-force winds ripped through the harbor. Ferries shut down. For three days I was stranded along with 50 Sardinians just 11 kilometers from home. Huddled inside the marina, we awaited updates from port authorities. “Ferries are cancelled every week. It’s your fault for coming in bad weather,” a port spokesman told us. “Don’t you people even know how dangerous the Strait of Bonifacio is?” I didn’t. Had I done some research beforehand, I would have packed extra underwear.

Historically, the narrow channel between the two islands is among the most dangerous shipping lanes in the Mediterranean. Winds funelled through mountain ranges sweep over high shoals and slam into ships. In 1855, the French warship “Sémillante” headed from Toulon to Constantinople struck a reef and sank, claiming 750 lives. It’s still the worst maritime loss in French history. The Bonifacio marina walls are dotted with photographs honoring sunken tankers and dead sailors. Today, all large vessels must obtain special permission to enter the strait.

But it’s the arrogant tone of the port announcer, and not the weather, that triggers mob anger. While 50 Sardinians might accept paying for additional nights’ lodging and meals, they can’t abide French insolence. With port officials pointedly unsympathetic, there’s talk of organizing an escape. An emergency meeting is scheduled at the Hotel du Roy Aragon.

The lobby is abuzz with frantic cell phone calls to loved ones and co-workers. A couple from Cagliari discovers that despite the weather there are ferries leaving from Corsica’s capital, Bastia, headed for Livorno. From Livorno, there are ferries to Sardinia.

“What are people without cars supposed to do?” asks one man.

“We were only supposed to be gone for one day. We can’t afford to go to Livorno!” exclaims a young mother.

The two-day route through Tuscany seems a roundabout way to cross an 11-kilometer channel, but today it’s also the only way. People with spare room in their cars offer rides to stranded pedestrians. Families open their wallets to strangers who reluctantly admit that they can’t afford the journey home, nor the cost of waiting out the storm in Bonifacio lodgings.

I pile into a rusty 1994 Citroen and soon our caravan of marooned Sardinians begins the three-hour drive north to Bastia on highway 198.

The road displays some of the similarities and stark differences between the two islands. Mediterranean brush and granite rocks molded by the maestrale wind litter the Corsican coast as they do in northern Sardinia. Signs are in both French and the native language Corsu (a dialect of Italian). Bullet holes perforate the French translation — much the way Italian language signs are shot up outside bucolic Sardinian towns.

Imposing towers built by Phoenician, Byzantine, and Pisan occupiers are as present in Corsica as in Sardinia. The sometimes violent Corsican independence movement has much in common with Sardinia’s rebellious Partidu Sardu d’Azione.

But Corsica appears wealthier than its Italian counterpart. While cinderblock construction is commonplace in Sardinia, Corsican homes have costly stone facades. Golf courses are scattered throughout the island, as are signs advertising four and five-star resorts.

Corsica’s pockets of extreme wealth stem from its longstanding role as a tourist destination — an industry that Sardinia has adopted far more slowly. Since Sardinia has a higher standard of living, its residents say that Corsicans carry themselves with an air of closed impudence. Sardinian poverty, they insist, forged a comunal culture borne of necessity. In a word, Sardinians are friendlier.

A string of celebratory honks signals the caravan’s arrival to the port of Bastia. Passengers file from their cars, relieved that after three they’re finally going home.

But our young female driver sits bent over the steering wheel crying. Her rusty, old Citroen has been leaking fluid for the past thirty minutes and is now belching smoke. She apologizes, but there’s no way we’ll make it back to Cagliari in this boiling wreck.

Just then a rattling noise gets her attention. Two Sardinian men have opened the hood and are tapping a hole in her radiator. A quick fix will save the day. She thanks them profusely before one of the accidental mechanics finally makes a suggestion: