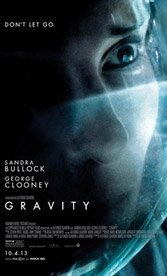 At once beautiful and ridiculous, Alfonso Cuarón 3D space odyssey shows what 21st-century digital effects can now do if they’re tightly focused and shoved into ninth-gear unmarred by distracting monsters or superheroes. The result is remarkable, dazzling, terrifying and intentionally claustrophobic, an “effects leap” that puts Mexican cinematographer Emmanuel Lubezki in a league of his own. But slink past the digital marvels — difficult, admittedly — and on the other side is an over-scored heroic trifle that keeps its spirit and spunk thanks only to its centerpiece, rookie Mission Specialist Dr. Ryan Stone (Sandra Bullock), who single-handedly transmits enough insecurity and determination to give space-walking effects a human dimension.

Shuttle crew-member and scientist Ryan is busy installing a new component on the Hubble telescope along with wisecracking commander Matt Kowalski (George Clooney) when Russia inexplicably decides to destroy an old satellite, creating a lethal debris field that slices through everything and suddenly turns an innocuous mission into a killing field. Soon, despite Kowalski’s cool head (the only spoken highlight), three become two become one, and the cut-off Ryan must make ends meet while continuing to transmit to Houston.

Once Cuarón has Ryan all to himself, he builds an amniotic ballet around her. She’s a weightless fetus trying to make sensory sense of alien peril that comes at her mostly soundless. Hers is stream-of-consciousness survival dance spiced with cutesy quips like, “I hate space.” The footage is the story, and Bullock’s face the only available canvas aside from the stunning passage of the continents below and the hot dance of damaged cockpits and tumbling debris fields. What matters isn’t so much what’s gone wrong but just how the wrongness looks, and Cuarón’s eye for how footage should flow is exacting and concussive, as if he and partner Lubezki had long ago dosed out every aspect of his little apocalypse.

But as Ryan’s improbable woes multiply, so does the swell of the titanic soundtrack, and, alas, the inlaid spiritual dimension. Here’s a story whose projection of near-hopeless peril would have done well to avoid a happy ending. But new-dawn Cuarón can’t resist sentimental gravity.