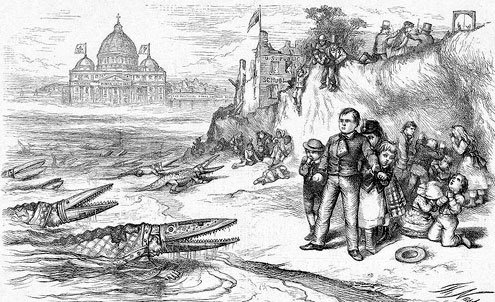 ased on North America’s global grimace, the pedophilia-tormented Roman Catholic Church is in shambles. The pope is alleged to put somnolence before vigilance; laissez faire ahead of prudence; moral laxity before rigor.

North American Catholics cry shame. Others demand the pope resign. An angry chorus insists Catholicism is losing credibility and adherents, an startling turn of events if true. But it’s not. And even if it were, Brazil, Mexico and the Philippines — the nations with the largest Catholic populations — would stanch any North American hemorrhage.

Reining in 21st century American indignation through realism is futile. “Adversarialism” is a sensational and self-sustaining sport that hears only its own noise. Even the language is war music: “A surge of abuse.”

Since World War II, the crux of the split between Vatican teachings and the centrist-progressive side of American Catholic thinking has centered on sexuality and sexual choices, specifically birth control, abortion, and to a lesser extent the ordination of women, each as inimical to Rome as they were half-a-century ago (and 500 years ago, for that matter).

The Vatican position is based on church law, and the natural law that implicitly governs it, both bi-millennial premises. The progressive viewpoint instead incorporates freedom of choice, science, fairness, and an underlying conviction that religious institutions like businesses should listen to their consumers and adjust pitches and product lines to public preference, or risk public disaffection, even bankruptcy.

The pedophilia scandal has temporarily crystallized the static church-vs.-dynamic church gap to the advantage of Catholic hecklers, both believers and not, who wield an indisputable weapon — child abuse — as a censuring cattle prod.

At the same time, pedophilia is not a stand-alone. It’s only the latest and most potent cannon in an American Catholic arsenal long pointed at the Church’s stubborn, celibate defense of sexuality as a procreative method only. A dissolute position, wrote one Catholic columnist, since it swelled the priesthood with “men confused about their sexuality who put our children in harm’s way.”

A leap as long as the ocean is wide, with crocodiles in the middle and frustration as the cause.

Having failed to talk Vatican elders down from their perch — the Rome church hasn’t budged on the sexual-conduct front — North Americans are now manipulating pedophilia into proof of a greater papal metastasis: If some priests are wicked men abetted by the blind-eye church, why continue conferring validity on a octogenarian hierarchy whose shortcomings betray innocent children?

By the standards of North American business orthodoxy, often based on romanticized notions of accountability and reciprocity, the papacy and its officers should at the very least apologize for their shortcomings and make satisfactory public amends. Someone, preferably its CEO, should take the fall. After which the institution itself needs to begin contrite reform. Or be forced out of business. Why shouldn’t Catholicism be held to WorldCom standards?

The Roman Catholic Church, at least in part, endures because of its stubbornness, lack of transparency, and resistance to apology. Infuriatingly to some, it loyal to ways, means, protocols and outlooks whose contrived authority is based on refuting the temporal and all so-called real time fads. Only the church’s time is real. Its rites, though amended in the early 60s, exist parallel to the secular. Some Catholic nations — Poland, for example — entwine the threads, but they are few.

The Vatican hierarchy plumbs the oblique, the ordered, and the secret, taking them for normal, in the same measure as modern-day North American Catholics depend on emotionalism, immediacy, and outrage as expressions of being.

In the specifics of pedophilia scandal, no encampment is large enough to contain both the Catholic disenchanted and the orthodox key-keepers. The more the pope offers to meet abuse victims, less credible he seems (though as the church’s doctrinal chief he helped introduce “graviora delicata,” or “grave abuse laws,” in 2001).

An institution that nourishes self-cleansing through prayer and emphasizes forgiveness as a balm cannot concurrently embrace a mission to purge itself of criminal bad seed, including pedophile priests. It can promise vigilance and punishment but it can’t root out or prevent human lapses whose existence underpins both the faith’s own self-awareness and its indiscriminate sustaining of compassion.

What the Vatican can do is stop making excuses, particularly in sexually-sensitive North America, where molestation matters more than the death penalty — which the Vatican objects to as fiercely as North American Catholics denounces deviant priests, to no avail since the denial of life fails the test of scintillation.