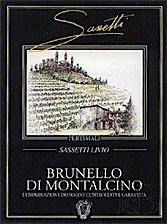 Don't yield to purchase pressure when it comes to high-priced wines...
I

hate the holiday season. And not because I am an Ebenezer Scrooge type. It’s just that this is the time of year when I see more friends or family members go out on a financial limb to buy extraordinarily high-priced wines as a result of some deeply-felt pressure to serve exceptional, obscure, rare or expensive wine as a showpiece for a holiday dinner or just to impress guests.

My good friend Beth from Washington, D.C. called last week to reveal that she had pre-ordered two bottles of a Robert Parker-rated Brunello, Pertimali Brunello di Montalcino 2001 (Sassetti) from her local gourmet supermarket at $130 (€95) a bottle, as well as a third, rare and near-mythical Fiorano white from Lazio for around the same sum. Always the considerate hostess, and no novice to wines, she wants to know what I think of both and then asks the dreaded and painful question, “Do you think I got a good price?”

Sam, a former colleague living in East Tennessee sends me an email thanking me for the bottle of Barolo I sent him for his birthday in November. He wants to know if I think the leftover half bottle will be enough to serve for Christmas dinner for a family of four or should he buy one of those wine-in-a-box thingies. (He lives in a dry county).

Both of these cases underline that deciding what to drink for the holidays goes well beyond reds-for-red meat, whites-for-seafood choices.

Beth’s choices, at first glance, seem costly. But they’re probably worth it. The Fiorano, from the wine estate of Alberico Boncompagni Ludovisi, the prince of Venosa, is an inspiring wine that few people, even those living in Rome, will ever have the chance to taste. It is a white that ages well, produced on Prince Ludovisi’s closed estate near Via Appia Antica, the ancient Appian Way.

The now-dormant vineyard (the prince retired) gained legendary fame based on Ludovisi’s quirky style of winemaking, which called for considerable tinkering. He pruned each Sémillon vine to yield no more than a single glass of wine, then left the vintage unfiltered in numbered botte that he reused year after year allowing mold to proliferate like Georgia kudzu throughout his cellar. The white mold growth covers everything, both bottles and barrels, and was thought to contribute to the wine’s unique lingering taste of flowers and honey with an earthy backbone.

Beth planned to serve this wine as the lead-in aperitif, thinking the white should stand as a second to the more well known Brunello, a name that most informed Americans nod at approvingly as a primary player in the world of Italian wines. In reality the Fiorano is the superior of the two younger wines, with a complexity similar to white Bordeaux and one I would serve as a highlight with foie gras or roasted white meats and not as an easily overlooked introduction.

For diplomacy’s sake, I sidestepped answering the cost question (even in North America, where Parker-rated wines climb in price quickly, this Brunello should have run between $45-$65). More importantly, it’s still a bit young to be served as the meal’s highlight and she would be better off selecting something a bit more aged and cellaring these two bottles to soften their tannins. Otherwise she risks serving something that doesn’t have the taste appeal the label promises.

Sam’s solution is much easier. Dump the Barolo (opened wine is not the same as aged) and forget about the wine box.

Once you know who’s coming to dinner, the courses you’re likely to serve, and how much you want to spend, ask someone you trust — and this is true year round. It may be the local wine seller or a friend on the other side of the ocean. The important thing to remember is that paying a lot of money or saving an expensive wine to serve well past its prime doesn’t mean you’ll be any happier than drinking plain old vino da tavola.

The important thing to remember is that high price doesn’t any more guarantee success than inexpensive wines spell failure. What’s important is pairing. My advice to hosts is forget about the price-tag, match primary flavors with what you plan to serve. If the preparation is simple, match the main ingredient; if the sauce is the main flavor, match the sauce. Sweet wines go with sweet, tart wines with tart, and high tannic wines with robust foods. Sparkling wines will work well for everything, and who doesn’t like the festive bubblies at this time of year?