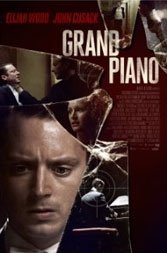 Tom Selnzick (Elija Wood) is an acclaimed American concert pianist who hasn’t played in five years after a humiliating public performance in which he botched his mentor’s landmark piece. Now he’s back for a Chicago recital, his Hollywood superstar wife Emma (Kerry Bishé) as a cheerleader. But once the concert starts Tom discovers his performance has been “hijacked” by a sniper (John Cusack) who, red dot roving, is threatening to shoot and kill his wife unless he gets the notes right. The right notes, the sniper explains, will help crack a safe.

There’s a nod to Hitchcock and De Palma in Spanish director Eugenio Mira’s riff on the mind-bending complexities stage fright, but the substance here is a hot mess. For starters, Wood is miscast, a wooden doe in tedious headlights. He never once looks or sounds like a concert pianist, let alone a lover of dense music. Then there’s the dialogue, with a forced Cusack (seen only at the end) compelled to utter lines like, “The audience is in control, and right now I’m your audience…” and “In time you’ll learn to be grateful…”

It’s understandable that Mira, who is also a composer, would want to make a stylish thriller about concerts and pianos and the inner and outer fear audiences can produce, not to mention a classical musician’s desire to exorcise old demons. The concert hall scenes satisfy that elegant premise. What Mira certainly didn’t intend was to make a film redeemed only by the classy sounds of a film-long symphony.