Grand is my Canyon 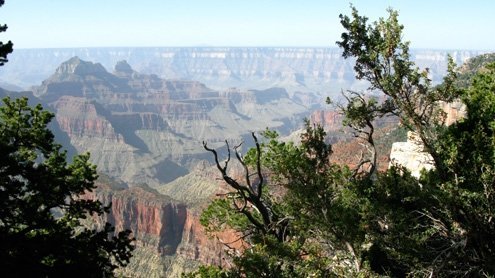 Only one word: Grand. Photos by Madeline Klosterman.
A

merica is a big place. The 48 contiguous states that make up the continent cover 3,119,884.69 square miles. But for most of my life the only states that really mattered were the coastal ones. The rest I called, the “fly-over states.”

The “fly-over states” were just that. States I saw comfortably from my window flying cross-country getting to the important ones: mainly California and New York. The coastal states are hip and cool. Everyone knows this. I always thought the disappearance of the ones in the middle would just make traveling that much easier.

Until my Rome friend Emilio told me that his favorite vacation destination was not in Europe or even a costal American city. Emilio had visited the Grand Canyon. He’d fallen for the middle.

Though it ranks among the world’s seven natural wonders (with Victoria Falls and Mount Everest), the Grand Canyon seemed to me another tacky, fly-over place. From above, its cracks and cervices stretch on and on like so much dried skin. A crusty place, I thought. That was that.

In grade school, there was always one dorky kid each year with a “What I did on my Summer Vacation” story that included a family road trip to the Grand Canyon. My classmate would pass around photos from the same rugged overlook and say the same thing: “The Grand Canyon is a really big hole in the ground. We got out of our car and looked over the edge. Then we got back in our car and drove off.” Not exactly an advertisement.

But an endorsement from an Italian friend who lives in my favorite place — well, that was different. It was time for me to go.

The Grand Canyon can be reached many ways. The most common is to fly into Las Vegas, then 300 miles over about five hours. This route takes 90 percent of travelers to the Canyon’s South Rim — abode of tour bus traffic and t-shirt sellers.

Getting to the North Rim takes a good 30 minutes more and is only open a few months of the year. Mostly undeveloped, the North Rim’s main accommodation is the landmark Grand Canyon Lodge, build in the 1920s from local Douglas fir. It gets the other tenth of the tourist trade. This was the place for me.

I took the Vegas route. Out of the city, the desert highway opened up across a flat expanse with rusty buttes and distant plateaus. Exit signs read “Moapa Indian Reservation” and later “Paiute Indian Reservation,” though there was no sign of life, just an unbroken expanse.

Entering Utah the highway became a windy two-lane road with hairpins around red mesas and deep canyons. The climb began. In Zion National Park granite boulders and cliffs — which reach nearly 8,000-feet — made me want to look only up. It was hard to drive.

As I rose, I saw geologic striations. Against a blue yawning sky, the layers folded and creased as if the earth was shifting to adjust to some new skin. I began to hum Pete Seeger’s American folk song, “This land is your land, this land is my land. From California to the New York Island, from the redwood forest to the gulf stream waters, this land was made for you and me.” I realized I had to stop. Too late. I was reveling in the dismissed middle, after all.

When I thought I’d seen every variation of rock and butte imaginable, Vermillion cliffs rose in the distance, a long plateau with fringed edges. I was in a Western riding a motorized “Silver.” I drove back into Arizona and into the Kaibab forest.

By the time I arrived it was dark. No brilliant sunset for me. Stars broadcast the zodiac. I walked to the only thing open. The saloon.

“Do you have any food?” I asked the bartender to the tinny electronics of 1980s classic rock.

“Nope, only bags of chips.”

“Drag. How about a beer?” I looked up and saw “Grand Canyon Ale” and ordered a pint.

“You just get in?” he asked

“Yeah, Just now. I haven’t even seen the Canyon yet.”

I smiled, drank my beer, which hit me hard, and tumbled to my cabin. There, sleep took me under.

At soft morning light, I pulled back the curtain with sleepy eyes.

There, without introduction was The Canyon. Immense. Silent. Magic.

My breath stopped and my heart skipped. Peering from the porch dressed only my pajamas, I could not speak. Just one word came to mind: Grand.