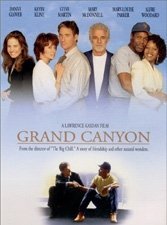 Danny Glover is tow-truck driver Simon; Kevin Kline an immigration lawyer named Mack. Lives are intertwined by coincidence. The Grand Canyon is the chasm, obvious and less so, that divides their lives. Steve Martin, Mary McDonnell, and Mary-Louise Parker assure all the bases are well-covered.

Martin’s action-movie director is the only obvious Hollywood caricature (“There’s so much rage going around we’re damn lucky we have the movies to help us vent it.”) Otherwise Kasden’s movie percolates, combing through rage without yielding to it. Glover is incandescent, a blue-collar shaman in disguise, a baritone bridge-builder. An underrated film, far more subtle than Kasden’s earlier mega-hit, “The Big Chill.”