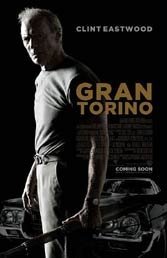 Funny thing about contrivance. Work too hard and let the wincing begin. Honor nuance and plot can sparkle. Clint Eastwood’s latest morality tale begins and ends with the shake-‘n’-bake maudlin: Meet Walt Kowalski (Eastwood), a seventy-something Korean War veteran and retired Detroit factory worker, who at his wife’s funeral snarls at the kid priest, his own two sons, their teenaged children and all that’s hallowed. Defiant, war-scarred and xenophobic, Walt is the vocationally anti-social character Eastwood inhabits better than any actor of his generation.

Soon enough, “hardnosed Polack sunofabitch” Walt is back in his own neighborhood, in his old house, now a dirty dot in Detroit’s sprawling suburban gangland, a mauled, cranky and sick loner with a Lab named Daisy. Walt’s new neighbors (to his chagrin) are “gooks,” namely a family of Hmong-Americans, ethnic Laotians. Hackneyed themes — “The neighborhood has gone to Hell” and “What’s the world coming to?” — are poised to strike.

But when a gun-toting Hmong gang cows neighbors’ son Thao (Bee Vang) into trying to steal Walt’s prized 1972 Gran Torino, Domestic “Dirty Harry” has to confront multiracial and multiethnic realities he’d just as soon go to his American grave resisting. It’s a case of “you try, you like,” and Walt grudgingly learns to appreciate the good “gooks,” whom he still calls “gooks” (or “zipperheads”). This is facilitated largely by Sue Lor (Ahney Her), the Hmong family’s smart-assed teenage daughter whose brief presence in the narrative is a bridge across which Walt can walk in search of a rusty caring side of himself. That leaves the bad gooks and a reckoning.

What’s notable about “Gran Torino,” aside from Eastwood’s deft self-mockery, is how it tames cliché just long enough to work. Walt’s relationship with his neighbors, and in particularly weak son Thao (Walt calls him “Toad”), grows imperceptibly from the credible to the moving. Walt is accepted for who he is, gruffness included, which gradually permits him to re-establish both order and honor as he knows them.

“I am not a good man,” Walt insists, but we know better. More important, we see better. Gestures, small and large, speak larger than words. Eastwood’s unwavering, valedictory performance — snarls, grunts, smiles, and tidbits of wisdom; “Me, I finish things. That’s what I do.” — is his best solo work in two decades. The actors picked to inhabit the Hmong world defer graciously to their brooding elder.

Though the climactic, uber-sappy payback — “Dirty Harry” at 75 — endangers all that came before it, Walt’s mid-film transformation is memorable enough to make this a star vehicle better than anything else produced by mainline Hollywood in 2008.