Gore and the Glorious Bird 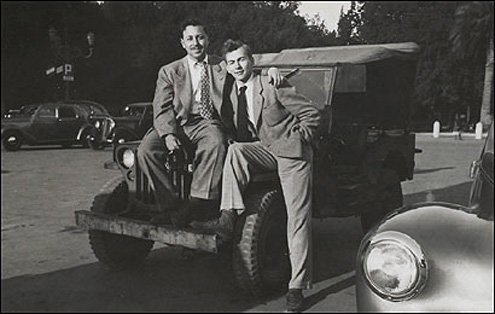 utted postwar Europe finally opened up for major travel in 1948, and in poured American literati. Among them was a bourgeoning young writer named Gore Vidal, who sent word of his long-awaited Grand Tour to his mother. “Tennessee Williams (“Streetcar Named Desire”) and me — we’re touring Italy in a jeep. Lousy weather, dangerous politics, working well… Life is luxurious and cheap.”

Vidal and Williams formed a fast and unlikely friendship. Vidal, an acerbic realist, was the patrician grandson of a U.S. senator, a stark contrast to the emotional and sensuous Williams, the Mississippi son of an alcoholic salesman. They met in Rome at the beginning of “that golden dream,” which Vidal defined as the two of them finally “free of poverty and hack work.” Each would become literary juggernauts. Vidal, a prolific essayist, author, and playwright was America’s last towering public intellectual. Williams, a two-time Pulitzer Prize winner, was among the greatest playwrights of the 20th century.

“I thought Tennessee ancient,” was the 22-year-old Vidal’s initial impression of Williams, 36, when they first met on the Janiculum Hill at the home of the American composer, Samuel Barber. As Vidal recalled wryly in his acclaimed 1993 memoir “Palimpsest,” it was not their first rendezvous. The libidinous southerner had attempted to cruise Vidal a year earlier on the streets of New York.

“He was following me up Fifth Avenue while I, in turn, was stalking yet another quarry. I recognized him: He wore a blue bow tie with white polka dots. In no mood for literary encounters, I gave him a scowl and he abandoned the chase just north of Rockefeller Center.”

Although romance never blossomed, both shared a predilection for younger male flesh, which Italy plentifully supplied. “In Rome, you rarely see a young man on the street who does not have a slight erection,” rhapsodized Williams in his “Memoirs.” Celebrating the extraordinary success of “A Streetcar Named Desire,” Tennessee kept a 17-year-old lover, “Rafaello,” for the entirety of his trip.

Vidal arrived in Naples that February, just after the publication of his best-selling and controversial third novel, “The City and The Pillar,” praised by Williams as “one of the first homosexual novels of consequence.” He bee-lined straight for the Galleria Umberto Primo, a site notorious for seeking out illicit pleasures with young Italian men, or topolini — mice — as they were christened by the former U.S. Intelligence Officer John Horne Burns in his groundbreaking 1947 novel “The Gallery,” a brazen account of homosexual life during World War II.

Williams took a two-room apartment on the Via Aurora, a stone’s throw from Rome’s Villa Borghese. He bought a rambling old jeep from a GI on his way back to the States and rollicked about the Eternal City at will. “At dawn I would drive over to St. Peter’s molto umbriaco, which means drunk as hell,” he reminisced, “and I would race the jeep through the wind-blown fountains to cool my head, I would race round and round a fountain until I was thoroughly soaked and then would head home.”

“Tennessee was the greatest company on earth,” Vidal recalled fondly. “We laughed. He had a wild sense of humor, grotesque, much like mine, and we just spent a lot of time parodying the world, mocking and burlesquing everything and everybody.” He affectionately nicknamed Williams the Glorious Bird. “The image of the bird is everywhere in his work. The bird is flight, poetry, life. The bird is time, death.”

In March, the duo hopped in Williams’s jeep and headed south for the Amalfi Coast. “Our drive down was through nothing but ruined cities that had been bombarded either by our fleet or by retreating Germans,” wrote Vidal. “Everything was a mess.” On the flipside, life in impoverished Italy allowed them to dine and travel on the cheap.

Neither knew how to put up the jeep’s canvas top, which meant the arduous removal of their possessions to safeguard against theft every time they stopped. Gore tucked his manuscript for “A Search for the King” into his shirt, while Williams concealed his latest play, “Summer and Smoke.” They toured Sorrento, Positano and Amalfi, as well as the hilltop town of Ravello where, in 1972, Vidal would purchase the sumptuous villa, La Rondinaia. He settled there permanently in 1984 after three decades of living in a sprawling Rome penthouse overlooking Largo Argentina.

Back in Rome, Vidal began visiting the ailing philosopher George Santayana, who was ensconced at the Convent of the Blue Nuns on the Celian Hill. Once, Vidal brought along Barber, the journalist Fritz Prokosch and Williams. “He was amused, I think, by the first two and mystified by the Bird,” Gore observed of the octogenarian. Santayana and Williams had never heard of each other, but their encounter moved Williams nonetheless: “It made me, this meeting, a little more at ease with mankind and certainly less apprehensive about how the close of a creative life might be.”

Santayana and Vidal talked Cicero, Saint-Beuve, the James brothers, the threat of a Communist takeover in Italy’s upcoming elections. “Why not,” Santayana remarked blithely on this last matter. “After all, they have tried everything else.” At their final meeting, he presented Vidal with an autographed volume of his memoirs, “The Middle Span.” “For Gore Vidal, George Santayana, April 1, 1948.” Santayana handed Vidal the book. “It is your April Fool’s present.”

Fearing post-election fallout (the Communists fared well but did not win), Gore and the Glorious Bird were soon gone, off to Cairo, Paris, London.