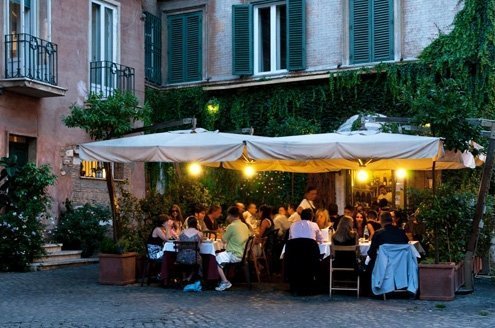 Summer can be a great time to have a small restaurant to yourself, or nearly, in quiet Rome.
R

ome in August is no longer the wasteland it was 25 years ago. I know this first hand. I’ve spent the last three summers here. The notion that Rome shuts down in August is mostly inherited from outdated guidebooks that seem unwilling to let it go.

August does see a substantial exodus from large Italian cities. It’s the country’s vacation month. Many businesses do close (leaving you with the famous Chiuso per Ferie sign). Quiet, empty-seeming Rome (away from tourist hangouts) acquires a quietly beautiful dimension.

I live in an upscale neighborhood that still plays by old August rules, with most of its residents headed for the mountains or seashore. Those of us who stay are like members of a secret Masonic club. We exchange knowing glances and secret handshakes. We speak a “stay-in-town” dialect of Italian familiar to those who appreciate this time of year.

The plusses include empty streets, parking spaces, minimal traffic, and shorter lines in markets, pharmacies and banks. And with fewer homes occupied and fewer cars on the roads, less energy is burned. Ironically, even with the AC off, that means cooler temperatures. Life among August Romans is also a joy. Perfect strangers emboldened by the empty month actually say, buon giorno like they mean it. Rude Rome is transformed.

Though some stalwart Rome restaurants and eateries still close in August, they’re now in the minority. Hit by the recession, many can’t afford not to stay open all year round, even on Ferragosto (the mid-August holiday). Here my shortlist of August dining spots.

Cesare al Casaletto The tables set out in the dappled light of a leafy Monteverde patio have been welcoming discerning gourmands since 2009, when Leonardo Vignoli took over a nondescript neighborhood eatery and turned it into one of Rome’s best trattorias. Start with the fried morsels, polpette di bollito (shredded boiled beef), and eggplant croquettes, and don’t miss the paper cones filled with feather-light miniature squid and other fresh catch of the day. Fresh seasonal vegetables dress pastas and complement the meat or fish entrées. A superb wine list graces the menu. • Closed Wednesday. Open in August, 12:30-3 p.m.; 7:30-11 p.m. | Via del Casaletto, 45. Tel. +39.06.536.015. No website.

Flavio al Velavevodetto Its location inside Monte dei Cocci — an ancient Roman archaeological site — gives this fine cucina romana spot a unique advantage: power-free AC. This curious cooling phenomenon occurs only in the summer, when the hollow hill of amphorae shards becomes a natural condenser that blows out chilled air. Flavio di Maio’s gets his meats from his own cattle and the seasonal vegetables are pulled from his family’s land in northern Lazio. Don’t miss the house cacio e pepe. • Open daily in August, 12:30-3 p.m.; 7:30-11 p.m. | Via di Monte di Testaccio, 97. Tel. +39.06. 574.4194.

Pipero al Rex The Hotel Rex’s restaurant is located in the Esquilino neighborhood and offers upscale Roman food promoted by host and sommelier Alessandro Pipero and Chef Luciano Monosilio. The €100 tasting menu includes complimentary champagne. Another perk is the stellar carbonara, whose portions can be purchased by weight. • Closed Ferragosto (August 15) and Sunday. Open in August, for dinner only. | Via Torino, 149. Tel. +39.06.481.5702.

Le Torricella Eating fish in the meatpacking district of Testaccio sounds odd, but this neighborhood trattoria is a Rome stalwart. August patrons can enjoy the fried and marinated moscardini appetizer, abundant plates of spaghetti with fresh clams, fish stews and soups (yes, even in summer!) and wonderful fish entrées, including prawn and scampi skewers. Great meat-based dishes too. Save room for dessert. • Open daily in August, noon-3 p.m.; 7:30 p.m.-midnight. | Via Evangelista Torricelli, 2/12. Tel. +39.06.574.6311.

Salumeria Roscioli When I walk into this gourmet delicatessen that serves lunch and dinner at tables pushed up against cheese display cases, Spanish hams overhead, I always holler “burrata, burrata, burrata,” and the staff knows to usher me to a secluded table and bring me a large portion of that decadent Puglia cheese. Just steps from Campo de’ Fiori, Salumeria Roscioli is open throughout August (except on the Ferragosto weekend), serving classic crowd-pleasers such as carbonara, amatriciana and other cucina romana pastas, as well as cheese and charcuterie grazing boards, meat and fish entrées, fine desserts and an ample choice of wines by the glass, or by the bottle from an extensive list. • Open August noon-4 p.m.; 7 p.m.-midnight. | Via dei Giubbonari, 21/22. Tel. +39.06.687.5287.