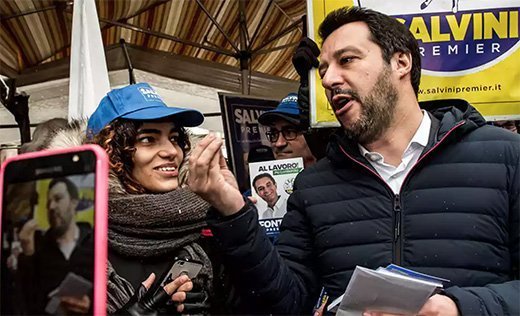 For The Times, the Lega Nord's Matteo Salvini is "a sweatshirt-wearing member of Parliament who has turned what was the regional Northern League into a national far-right party…"
L

iberal elitism can be as exasperating as conservative buffoonery. Both indulge caricature and cliché, sly or loud.

Consider a recent New York Times editorial about the prospect of an Italian government headed by the populist Five Star Movement and the nationalist (and openly xenophobic) Northern League. The prospect of such an alliance has already raised fears of trouble ahead for the European Union, rightfully so.

But how the Times described the figures atop this alliance is what most needs noting. It again demonstrated why Manhattan liberals will never understand (let alone work to understand) the motivations of Donald Trump supporters, who exist in part to spite lofty urban visions of how government should look.

In the Times’ Italy editorial, titled “The Populists Take Rome,” Five Star Movement leader Luigi di Maio was described as “a college dropout from a small town near Naples,” cultural racism at its finest. The Northern League’s Matteo Salvini got fashion police treatment as “a sweat-shirt wearing member of parliament,” once again a cultural slight, since Italy is known for its elegance.

Most savaged was Primer Minister-elect Giuseppe Conte, “whose résumé’s list of research at famous universities drew a blank at some of them, including New York University, which could find no record of him. His main qualification is apparently his willingness to do the bidding of the party leaders.”

The Times described Five Star Movement leader Luigi di Maio as “a college dropout from a small town near Naples,” cultural racism at its finest.

This resentful ire was in part triggered by former presidential advisor Steve Bannon’s public embrace of Italian populist lurches. For the Times, whatever Bannon says deserves immediate, and ferocious, rejoinders — all the more so when one of his favorite foreign parties, the League, sits on the brink of national power.

But the matter at hand isn’t entirely political. It’s also one of style, and a sense of diplomacy, two words very much in peril. As Trump forces have lathered their rhetoric into streams of pure froth, so the liberal elite has decided it, too, can play the game, spreading demi-insult under the guise of eloquence.

While the Times would never justify police behavior in an incident involving the shooting of a black man – the topic is too incendiary in a Black Lives Matter environment – and would never take the side of a male celebrity or politician who responded to allegations of rape as false and the relationship under scrutiny as consensual – again, in the #me2 age, the topic is too hot – it can and will take a jab at a foreign party leader’s integrity based on his academic status and place of birth (Naples has long stood for chaos in the Western mind), or his parliamentary fashion choices, or his reference to schooling abroad. The latter is a thorny point, since Italy has never applied Anglo-Saxon rigor to the writing of resumes, and plenty of Italians who claim they studied abroad did not come home with a degree. What mattered was their internationalism, however sketchy.

A government suspicious of the EU (Germany in particular) that proposes to add to its country’s massive debt while also expelling hundreds of thousands of migrants is one very much worth careful monitoring. Some of its pledges are risky, particularly since Italy’s banking system deals poorly with shock waves.

But criticism and monitoring are one thing, derisive references to small towns, t-shirts and lackey prime ministers quite another. When a good newspaper punches below the belt, and comes to do it consistently, any hope of a return to balanced political dialogue in the media is thrown to the wolves, with verbal meat served raw and raw only.