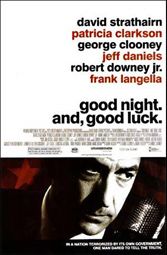 Even if you know nothing of Ed Murrow, Fred Friendly, and their ample American TV legacy, the hues of the 1950s leave a smoky imprint on George Clooney’s classic black-and-white narrative. Chain-smoker Murrow was a TV news pioneer who liked doing things his way, with producer Friendly as a co-conspirator. Television’s power to influence was a rumor until Murrow clashed with Red-baiting Sen. Joe McCarthy, which marked the beginning of the end for McCarthy.

Clooney is less interested in filling in historical blanks — he doesn’t, in fact — than portraying pre-consensus journalism: vain, erudite, highly personal, and often deeply loyal. David Strathairn is deft and dutiful as Murrow, while Clooney underplays Friendly. Frank Langella is particularly good as William Paly, the CBS chairman caught between politics, corporate pressure, and a sense — still strong — of right and wrong. There are no wrong notes here. See this as a double feature with “Network.”