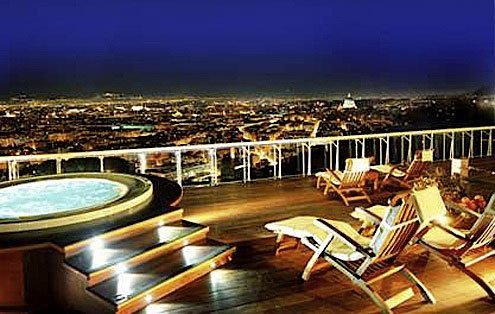 The view from the Hilton is stunning, if you're not contending with credit card anxiety...
I

chose the Cavalieri Hilton for a number of reasons. Rome is lovely, but it’s so busy and crowded, I wanted to find an oasis from which to escape from sight-seeing at the end of the day. In the hills, overlooking Rome, not more than ten minutes from the Vatican, the Cavalieri is just such a place. Add to that a restaurant that just earned its third Michelin Star, an award-class spa, an Executive Floor Business Center, and one of the most lovely pool settings ever (not to mention in a city environment) and I knew it had the makings for a pleasant experience — maybe.

As it turns out, my trip to Rome is not one that I would necessarily characterize as a “pleasant experience.” In fact, it resembled more the kind of nightmare depicted on television commercials for the American Express card and travelers checks. I can remember watching those commercials and thinking, “those poor inexperienced sots. They don’t need American Express, they just need to accept the realities of city travel and be more careful.”

I’ve found in life that it’s always a big mistake to be cocky. An example of this presumption was played out quite vividly in Rome. I travel a lot. In fact, if the total days were accumulated, you might say that they rival the days I spend in my home town. I am the epitome of the savvy traveler. I’m aware of my environment, my physical possessions and my safety. On this trip, I was truly in high spirits. I was traveling on business, but had the luxury of being accompanied by my nine year old son who had just finished school. We had toured the Vatican and chose a restaurant nearby to have lunch and talk about the splendors of the Sistine Chapel.

I chose a table in the back corner of the restaurant. I had heard stories about purses being lifted by unaware restaurant patrons who casually hang their purses on the back of their chairs. I had no intentions of being one of those people. We had a tasty meal and were commenting on how unusual it seemed to find a restaurant with good food at a reasonable price so close to one of the most important tourist sights in Rome.

When I went to pay the bill for this economical lunch, I reached for my purse. I had put it on the back of the chair against the wall and it was gone. In it were our passports, my driver’s license, my credit cards, our train ticket home, my check book, and all our cash, among other valuables. My son looked at me with imploring eyes, his voice cracking. “How are we going to get home?” he managed to ask.

I was furious, confused, and incredulous. To this day, I don’t understand how it happened. I don’t even want to guess. “We’ll get home,” I said, trying not to think about the photographs in my wallet that I would never see again, or the earrings I had dropped into the internal pocket of the purse hours earlier — the ones my husband had given me during our first year of marriage. We hailed a cab. Alex reminded me again that we had no money to pay for it. All I could say was, “The Cavalieri will take care of us.”

When we arrived at the Cavalieri, I asked the cab driver to wait, went into reception, explained what had happened and asked for €10 to pay the driver. Without any further questions, the cashier handed me the money and I paid the tab. Then I came back in and broke down. The desk manager and client relations manager were already waiting for me. Someone else had gone to get a glass of water for Alex. I tearfully explained what had happened.

My memory of those first few moments at the Cavalieri are not exactly clear. I was distraught and exhausted. Uniformed staff was coming and going. One to get our room key, another to call the embassy, a third to get me the address and telephone number of — you guessed it — American Express. Within minutes we were escorted to a beautiful room, with a 180 degree view of Rome. There was a bottle of champagne being chilled. Alex quickly found the remote to the flat-screen plasma TV and distracted himself by watching the World Cup. I opened my laptop and began reconstructing the contents of my wallet and the phone numbers I’d need to cancel credit cards. Moments later, a vase of exotic flowers arrived. I almost burst into tears again.

While I was making telephone calls, several floors below the concierge was investigating how to replace our train tickets. Someone else had made Alex and I a reservation at the pool-side restaurant for dinner. The front desk rang through the American embassy. Minutes later the address and telephone number of American Express was slipped under my door. A cash advance had also arrived which I quickly signed for. I would need it for cabs and other expenses into the center of town to sort out things. I was beginning to think that there was an entire staff of individuals devoted to me.

On the Executive Floor there is food and beverage all day long. Alex consoled himself with chocolate truffles and I with a glass of white wine. He put his arm around me. “It’s going to be O.K. Mom.” I asked for the password for the Internet. The attendant began to ask me for my passport — a new Italian law requires hotel internet users to register — She stopped in mid-sentence, “Oh, are you the signora that had her purse stolen with your passport in it?” I nodded. “Go right in,” she said, “I’ll figure out a way to register you.” I was amazed. A hotel staff that actually communicates — what a novel concept. Later, a staff member accompanied me to the police station despite the fact that I speak Italian fluently — “Just in case …” he told me.

When bad things happen, there are only a few things that make me feel truly better. I tend to obsess about the event, how it could have been different, what I could have done to prevent it — and those thoughts only make me feel worse. Sometimes, an embrace from my husband or children lifts my spirits, and in general, the indescribable consolation of being surrounded by family, inevitably makes me feel secure and gives me perspective. Alex and I had each other during this trip, and that helped a great deal. But the Cavalieri, in addition to all its efficiency, courtesy, and know how, had also treated me like family, surrounding me with a cloak of protection that gave me the overwhelming feeling that everything would, indeed, be alright.

Alex and I eventually got things sorted out. With one credit card, we had the ability to buy a new ticket and go home. But in the meantime, we went to the spa, we swam, we sipped frozen drinks in our cushy white robes, we ate at the ninth floor Michelin Star, La Pergola Restaurant, and recovered from our experience.

I do have a scar related to my experience in Rome. I can’t help but remember that helpless feeling of being violated. But it’s not the only thing I will remember. I will remember that my nine-year old son had the fortitude to see through his own fears to comfort me. I will remember that a thief’s callousness can be overshadowed by the caring of an able staff of strangers. I will remember the feeling of my body slipping through the cool water of the Cavalieri pool, the view of sun-drenched Rome from La Pergola Restaurant, and the cocoon that was provided to us so that we could leave concentrating more on our fortune than our misfortune. From one “savvy” traveler to another, the choice of hotel counts when all things are equal. And when things go wrong, that choice counts even more.

— Editor’s note: no promotional considerations were received in connection with this report.

About the Author: Denise Hummel

Denise Hummel is a graduate of Barnard College, Columbia University and the Washington College of Law. After practicing law for many years, Denise pursued a career in journalism. She lived in Varese from 2005 through 2007, freelancing for a variety of international publications. She is now the San Diego-based executive editor of justtheplanet.com, an online magazine for international travelers.