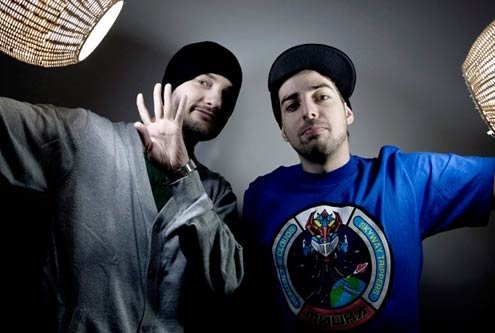 Phra and Bot: End of the line for the original Crookers collaboration.
I

n line with the deepening euro-recession, the news out of Milan is downbeat. Milanese house duo Crookers recently announced it won’t operate as a unit after a decade-long collaboration between Andrea “Bot” Frantangelo and Francesco “Phra” Barbaglia. “Bot” wants to move in another direction, leaving “Phra” with the act’s name.

What becomes of Crookers from here is anybody’s guess — the reason Bot and Phra got along to start with was how their tastes differed from their Milan contemporaries. Bot could play guitar but had spent considerable time with turntables and synths. He also had a graffiti habit that showed in Crookers’ album art. Phra was a product of the Italian hip-hop scene, capable of DJing or emceeing. The differences eventually came together in a sound best described by a song on their Massive EP, “Disco Fidget.” Quick edits and fussy production tweaks powered by a pummeling 4/4 beat.

They were a big-sounding group in the vein of the Ed Banger Records crew and, most obviously, Daft Punk. But while their production style might have been ubiquitous in 2008, few worked as hard as Crookers did. Single after single, free mix after free mix, Bot and Phra flooded the market with a wild array of songs.

Here are the highlights: They basically made Kid Cudi a star by remixing of “Day ‘n’ Nite.” They teamed up with UK grime legend Wiley on “Business Man.” Kelis did her enigmatic not-quite-diva thing for them on “No Security.” They single-handedly updated The Chemical Brothers for a new millennium on “Salmon Dance.” It goes on.

As with the less recent split of Belgian duo Aeroplane, Crookers’ time for most has passed.

My first reaction to hearing they were giving up was that it felt right. Phra disagrees, which is fine: Their music and his performances will remain available for those among us who haven’t yet experienced it live. But it’s undeniable that Italy’s biggest musical export of the past few years just won’t be the same.

The softer sounds of Panagiotis Melidis seem like a fitting new beginning as attention shifts away from house to chillwave and other points in between. Melidis, better known as Larry Gus, offers a new lease on contemporary Italian beat-making with his latest album, Silent Congas (DFA).

It was a pleasant surprise to discover the Greek-born Milan resident. Largely unknown outside a small global network before the album’s release (for free, even) in mid-November, Melidis is one of the DFA’s biggest curveballs. But Silent Congas, as the name suggests, doesn’t get in your face with a party ’til you drop mentality. It’s just as important what isn’t being done as what is.

Inspiration was easy to come by. Melidis had been reading about the French “workshop of potential literature,” the Oulipo. By adding constraints (say, the drop of a vowel or imposing a word count), the Oulipo works toward harnessing this “potential.” Melidis has drawn from it, adding or subtracting sounds to make something new.

Sounds like The House of Pain’s scream sample from “Jump Around” blending with those noodling guitars and airy female vocals on “Emergence” bump up against the cheery beach harmonies of “23 June 1975” to create a Mediterranean twist on Madlib’s ongoing global hip-hop histories. It may be glib to call Larry Gus the Balearic Beat Konducta, but it’s a start. Here’s hoping there’s much more to come.