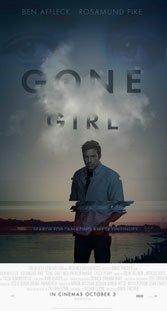 In director David Fincher’s compelling thriller, everyman Nick Dunne (Ben Affleck) and mysterious wife Amy (British actress Rosamund Pike) seem to have the ideal marriage until the recession claims both their jobs. Suddenly, things unravel. They move from New York City to Missouri, where Nick’s mother is dealing with cancer. On the morning of their fifth wedding anniversary, Amy vanishes and Nick is the prime suspect in her of murder. Media devour the story.

Fincher, working from Gillian Flynn’s bestseller (she also wrote the script), cleverly pulls audiences toward Amy, only to swing the pendulum closer to Nick, finally settling on neither. Pike is fabulous as opaque Amy, who explains her thinking through voiceovers and journal entries as Fincher (“Fight Club,” “The Social Network,” “The Curious Case of Benjamin Button”) introduces new clues and interpretations of her disappearance.

Affleck also shines as slightly stupid, muscular and self-centered yet likeable Nick, who shares innermost thoughts with his twin sister Margo (Carrie Coon). Neil Patrick Harris as Amy’s obsessed ex, and Tyler Perry as Nick’s litigation lawyer, bring life to sketchy characters. Fincher is also interested in the social role of modern media and the intrusions of hype. The finale is heavy on gore, but it’s the kicker that will keep your mind churning for days. This is skillful contemporary filmmaking at its best.