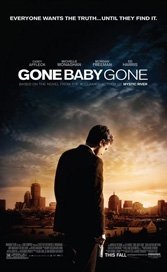 Ben Affleck’s directing debut is tightly wound but slow to uncoil, which makes its simmering all the more engaging. He casts his brother Casey as Patrick Kensey, a missing person’s PI alongside girlfriend Angie Gennaro (Michelle Monaghan). When a four-year-old girl goes missing, the wet-under-the-ears pair is called on to aid police. Patrick knows the neighborhood and gets the reluctant support of chief Jack Doyle (Morgan Freedman) and a detective named Remy Bressant (Ed Harris). The film’s first half seems to be little more than a homage to Boston, to slang, to neighborhood and to tough guys, which the Affleck Bostonians known well. Until a wild-eyed Haitian drug lord comes into play, quickening everyone’s pulse. The best-laid plans are foiled, the girl isn’t found, the victim of a drug transaction gone wrong — or so it seems. Moths later, however, a boy goes missing.

This second abduction sees both Afflecks begin to cut their teeth. Ben intensifies the pace and brother Casey’s acting grows more urgent, suiting the mood of the unsolved case and the story’s emphasis on children and unreliable parents.

The whole builds up admirable steam until a central truth is revealed. Ben Affleck knows Boston and identifies with its syncopated snarl and blue-collar slang, which he underscores to kind and menacing effect. There are also hefty if ambiguous doses of police and family corruption. But it’s how the Affleck moral compass operates that makes it all worthwhile. Based on Dennis Lehane’s eponymous novel.