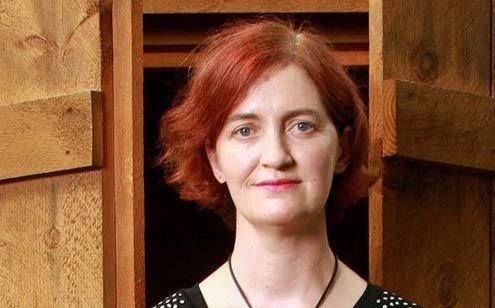 Donoghue moved to Canada in the late 1990s and recently acquired citizenship.
R

eaching orgasm the “visitor” wheezes like a seal: “Oh, sweet Caroline.” In Emma Donoghue’s short story collection “Astray” (Picador, 2012) home-prostitute Caroline Thompson is one of 18 protagonists. All are actors within fully conceived fictions. They are also deeply moving spin-offs from spare historical accounts.

In “Astray” Donoghue tracks travelers to or within the United States and Canada — through wildly varied settings, from the 17th to the 20th century. Her voyagers will arrive in places new and strange to them. They will leave few traces: in birth, marriage, death, or imprisonment records.

Caroline’s tale is set in London, 1854. Where an unskilled young woman finds but one “occupation” to support a small daughter and younger brother. Receiving client “visitors” in her home, she’s social outcast. Yet at tale’s close she gathers courage to recount her life story in a letter seeking help. Her new, desperate hope is in the title: “Onward.”

Her narrative has threaded to closure. Right? Not quite. Because this author has a second signature: her informative but totally extra-literary codas that supply the post-fictional histories of her protagonists. So it is with “Onward,” whose addendum shows how Donoghue “discovered” this young prostitute through the collected correspondence of Charles Dickens. There he mentions that letter, Caroline’s letter, addressed to him. Further references note his gift of funds to help with her passage. Caroline and family sail for Canada, and a fresh start.

The historical and the fictional Caroline merge. This author’s two most recent novels managed a similar feat: morphing real-life data into complex fiction.

Her Booker short-listed novel “Room” (2010) mirrored current events regarding long-term kidnapping and sexual abuse. Information the author uses to give the victim and five-year-old narrator a voice. Then came “The Sealed Letter” (2011), a Victorian-dress fiction that relied on public domain news and trial transcripts of a searing divorce case to create an unveiling of private sexual lives.

Like Donoghue’s cast in these long works, the actors in “Astray” bear the same burden, whether they are early Puritan settlers, California gold miners, sex victims, or seductive goldbrickers. In what she calls “border-crossings,” they shift “out of place, out of their depth.”

Yet “Astray” is a pace ahead for this writer. In part because the cast range is flat-out astonishing.

Wickensburg, Arizona, 1873. “A man walks into a bar… the stained buckskins… the cigarillo… what would you call it?… It’s a female!” A customer laughs. So begins 24 hours in the life of Molly Monroe, sometime prospector, cowboy, cook, and saloonkeeper. This single episode, “The Long Way Home,” strips her bare to the heart.

Cape Cod, 1639. In “The Lost Seed,” Richard Berry writes along the margins of The Good Book, beginning his record of God’s seed cast in the Yarmouth Colony. In the cruel hardships of this new land, his mind wanders. He dreams of his fellow colonists engaged in unclean acts. At Meeting he denounces their “Evil Ways.” And mourns a lost seed.

London, again, 1882. “Man and Boy,” an appropriate opening to the volume, sees Donoghue use her imaginative gifts to re-create the bonding affection between Jumbo, one of the largest elephants in captivity, and Matthew Scott, his London Zoo keeper.

When P.T.Barnum buys the mammoth to transport him to America, Scott’s not included in the deal. Yet “I’ve been Ma and Pa to him,” Scott rages. Jumbo refuses to leave his keeper. After narrative resolution, Donoghue’s tailpiece info follows Jumbo and his devoted friend across later lives, to their respective deaths, many years later. Quite a coda.

What a treasure trove of passion in this collection. And what a surprise to find I actually enjoyed the double story closures contained in short fiction plus historical appendage. And if Donohue isn’t the first to add source references to imaginative works she may be one of the first to successfully pull off a one-page coda after a brief, five-page story. And fill that addendum with affecting details of the protagonist’s full life journey.