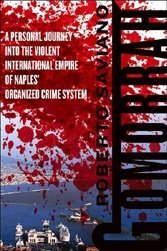 By Roberto Saviano, translated from the Italian by Virginia Jewiss

#8220;Gomorrah” refers to the Neapolitan Camorra, which the young Saviano (then 28) infiltrated to produce an eye-witness, tell-all exposé that cites the names of bosses and their modus operandi. Camorra families control the twelve-kilometer-long port of Naples, a commercial empire impossible to police that yearly handles 50,000 contraband shipments (mostly from China). No longer limiting themselves to drugs, prostitution, and rackets, clan bosses put on a corporate face to run a global industry dealing in black market goods from fashions to weaponry.

Most notorious for their handling of refuse management, the Camorra has made billions saturating the region with toxic waste, creating an environmental disaster that is now causing alarm throughout the European Community and beyond as Japanese importers recently discovered their mozzarella laced with dioxins. Yet Italy’s political parties, themselves tainted by corruption, remain unwilling to tackle the issue of organized crime. A marked man, whistleblower Saviano lives under round-the-clock police protection.