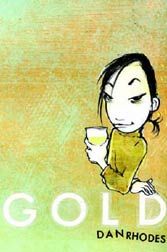 Miyuki Woodward is a character Rhodes can delight in: a half-Japanese, half-Welsh lesbian who pays annual winter visits to a local coastal town, hangs out at the pub (“The Anchor”), counts “unblessed” sneezes, and spray-paints a shoreline rock the color gold (“I thought of it as art.”)

Whether she and her simple-mindedly endearing entourage, including Septic Barry and the Children from a Previous Relationship (a band that’s never played), merit such bittersweet rumination depends on your affection for the road-less-traveled. Rhodes’ sense of humor is tender as always; he likes his characters: there’s “tall Mr. Hughes,” for example, who’s so engrossed in telling stories about alligators, dwarfs (“dwalves” to him), and bridges that he forgets to put his penis back in his trousers before venturing back to the bar. Informed of the protuberance, he says, “I knew that would happen one day,” zips up, and carries talking on about bridges.

Septic Barry, a part-time lady-killer, is engrossed in the family business, “Contemporary Temporary Toilets.” But Miyuki is the star. She has a pact with lover Grindl to spend two weeks apart every year, and “The Anchor” is both escape and escapade. Rhodes, like Nick Hornby, writes affirming comedy that glows like a soft bulb. Hope is gold’s best fable.