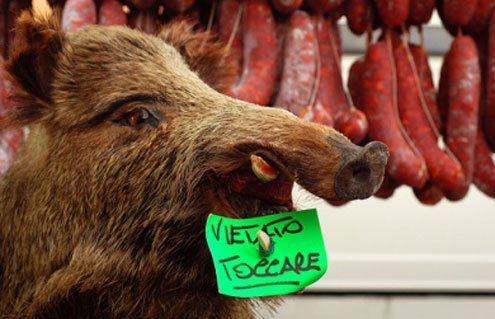 All yours for a handful of noise...
G

rowing up I spent the majority of my summers and most weekends running around the woods of northwestern Connecticut at my parents’ house. As a boy I built tree-forts, most of which collapsed (one while I was sleeping in it). As I grew up I fished more and more, rising with the sun to catch largemouth bass. I eventually began hunting with my dad, mostly fowl, but the occasional deer.

Escaping from the city into nature is one of the hardest things to replace about life at home, especially when you live in Rome.

Fortunately, a family friend has a villa in the hills outside Todi in Umbria. It’s a long way from the train station and not reachable at all without a car. But last week, with few obligations in Rome, I decided to make the trek to lend a hand with the olive harvest. Our family friend’s villa has some 50 olive trees.

I went up a few days before the harvest started to read and catch up on writing. I took the train to Todi and a taxi to the house. The housekeeper had stocked the fridge with some basics to tide me over; lasagna, a roast chicken, a salad and a few beers. While I was grateful (I didn’t have a car and the nearest small grocery store was about an hour walk away), the options didn’t leave me with much to cook.

The first night I heated up the lasagna (delicious) and made the salad. A tasty meal, but all too brief a process.

My first full day I took a long walk into the hills and met an old farmer whose Umbrian accent was so thick I could barely understand him. I then set off in the direction of a small medieval tower peeking its head out of the trees on the crest of a hill. After rambling across a few fields, getting some odd looks from olive harvesters, I stumbled on a small dirt road that brought me to the tower, which appeared to be an old lookout post. I saw slits for archers on the second story. Inside was a five-meter square room with a caved in roof.

Walking back to the path, I heard yelling and the occasional dog bark. I rounded the corner and found a hunter with a 30-30 rifle slung over his shoulder and three dogs straining at their leashes. Our conversation was brief but informative.

Me: Solo la toretta, una passeggiata. Lei? (Just the tower, a walk. You?)

The 16-words taught me that you hunt wild boar with a large rifle (no surprise there) and that you attract them (or scare them out) by making as much noise as possible (quite a surprise). I also learned there were mushrooms in the woods nearby.

The next morning I zigzagged my way back and forth across the same dirt road, and sure enough I soon had a medium-sized plastic bag full of wild mushrooms, about half of them funghi porcini. Along the way I also found some wild arugala and chives. Suddenly I had new ingredients to play with.

Though necessity is said to be the mother of invention, I’m inclined to think it’s restriction that works the magic, at least in the kitchen. How do you make something delicious from just what you have in hand, namely:

I carved the chicken and tossed the carcass, including wings and meat, along with half the onion and some of the sage, into a pot to boil into broth.

In the meantime I made fresh pasta, mixing flour with just enough water to hold it together. After letting it sit for about 30 minutes I rolled the dough thin with a pin. With only a knife to cut the dough I slashed it into scraps, making maltagliati , which literally means “badly cut” pasta.

I softened the rest of the onion in a large pot, adding a healthy splash of olive oil. When it turned translucent I threw in the coarsely chopped mushrooms. In about 10-to-15 minutes, when they lost all their liquid, I added shredded chicken and let that cook for a minute or two.

While this was going on, I strained the broth, brought it back to a broil, and cooked the fresh pasta in it — probably taboo, but the result was great. I then added the pasta and most of the broth to the onions and mushrooms and let the whole thing simmer for 20 minutes to reduce down.

The end result, sprinkled with finely chopped chives, provided a perfect meal for a cold Umbrian evening. It was nicely complemented by a side salad of the peppery wild arugala.

Below is a slightly different version of the same stew, with a few more ingredients.