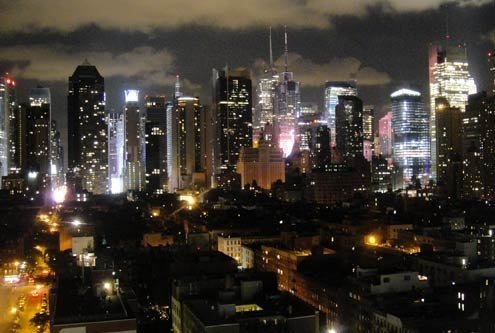 I can see my house from here!
W

hoever said that love is just around the corner was right. Well, maybe not love, but something like it.

Jackie had never seen Eric before. If she had, it would only have been in passing — shuffled shoulders on their way up from the subway station or shaded eyes on a Sunday morning at the café when no one wanted to see or be seen until the coffee had cleared their heads or ever.

They finally ran into each other on purpose via the Internet and a somewhat shady application that allowed singles to find other singles in the vicinity who were interested in meeting up…whatever that meant.

They exchanged a few messages and decided to have a drink at the bar on the corner of her block. After a second one they realized it was also his block. They had a laugh, took a shot, and decided to check out the view from his rooftop.

From upstairs she could see straight into her own living room. The shadowy figure of her flat-mate was somewhat settling. She couldn’t tell if he was dressed or not, which was definitely for the best. She could also see her own rooftop, which was less settling as it had no curtains to obscure the view and she’d been up there just weeks before doing exactly what she presumed she and her unbeknownst neighbor were about to do now.

Eric approached her from behind with two empty glasses and a bottle of Bourbon.

He asked her if she liked the view and poured two shots. She laughed. I can see my house from here! She hoped it was endearing.

They emptied their shots. While they heat worked its way through their limbs they shared some still semi-coherent thoughts on how two people can be so close and never meet. And what was destiny anyway when in the end a computer had brought them together using statistics? And yet in some ways the world might be coming full circle. Both of them had grandparents who met and married someone from the same neighborhood.

Jackie could hear herself chattering as she always did on first dates. And just like every other time she willed herself to stop but somehow couldn’t.

He brushed away the strap of her tank top and kissed the top of her shoulder. She blushed and felt him move in closer behind her. He put a long arm around her waist and the words in the back of her mouth just give up.

And then no one was saying anything at all, the only sound their Bourbon-scented and breath as it caught between kisses. Jackie felt the hot pavement of his rooftop on her knees first, and then her back.

He was strong and wanted to see her face, and so moments later she felt the relief of an evening breeze chilling the rivulets of sweat that streamed down from her hairline and collected in the small of her back.

When neither of them could bear the heat they descended to his bedroom and collapsed on cool sheets.

Midway through the night she awoke for water and found instead his hands and decided she wasn’t so thirsty after all.

The next morning as she dressed, she observed her house from her window. Her upstairs neighbor was coming in from a run and had paused to stretch on the stoop. Jackie could tell she was wearing lipstick and almost felt like a spy. In fact, the whole block was waking up and she watched and listened to it all from another perspective.

He appeared in the doorway with two warm mugs. They sipped their coffee side by side. He had also brought her a clean towel.

It was a funny feeling to be so close and yet so far from home. At the same time, she somehow felt more at home than she had in ages.