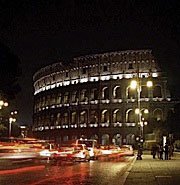 The hardest part about coming back to the United States for many of us is reconciling that we call two very different places home.
I

first realized I missed Italy when I was standing in a grocery store in Washington, D.C. with an eye-level stack of Lean Cuisines, getting freezer-burn on my arms. What am I doing? It startled me how quickly I was Americana again. Lean Cuisine shopping violated a pact that I had made in Rome to live my Italian lifestyle in America. Number one on the list was “No eating frozen foods.” But, the Lean Cuisines were so easy, a complete meal with all of my allotments for carbs, calories, veggies, and protein all at the push of a button.

I didn’t have that option in Rome. Where I once sautéed zucchini, boiled pasta, baked chicken, I now regressed to the supremacy of fast and easy eating. It was a Wizard of Oz moment. Dorothy: You’re not in Rome any more. I was rethinking my belief that you could take the girl out of Rome, but you couldn’t take Rome out of the girl. Once again, I was culturally, socially, habitually American. I still bought the Lean Cuisines.

During my five month stay in Rome as a university foreign exchange student, I slipped into the lifestyle effortlessly. Within a week, I knew which spot had the cheapest and best supplí (not too much rice). I knew to bicker with my taxi driver when he tried to turn off the meter. When I returned, my friends called my clothes, “so European!”

But it wasn’t all peachy. I found myself comparing American bureaucratic efficiency with Italy’s more unpredictable variety. When I renewed my passport at home I knew with absolute conviction that it would take five weeks. Because the United States State Department told me so. When I was in Rome, I waited my entire stay for my permesso di soggiorno. I was told that at any minute I would receive an email telling me to go to the police station to start the process. It never came. On a late night taxi ride, a car rear-ended my cab and my driver dispensed with insurance information protocols in favor of shouting expletives and punching the other driver in the eye.

I concluded that the reason for my reversion to the American-me was that the American lifestyle was the path of least resistance. Buses come on time, meals often come in microwavable boxes, most people work 10 hour workdays (and often longer) with a week long vacation some time in the summer. It is predictable and boring, but living amongst the other eaters of Lean Cuisine made me forget the alternative.

In 2003, Raeleen D’Agostino Mautner wrote a book entitled “Living La Dolce Vita: Bring the Passion, Laughter and Serenity of Italy into Your Daily Life”, which purports to tell Americans how to live like Italians in America. It suggests that the Italian lifestyle is portable, that we can pack it like a laptop or a cell phone. Back in the land of Wal-Mart (I buy in bulk again), impossibly large cars (I didn’t sell my SUV), and TV-dinners (I can’t help it if “Friends” comes on during the time that I like to eat), I have my doubts. Resisting the urge to adapt to your surroundings is an uphill battle.

A few weeks ago, I attended a late night dinner in a small town in Arkansas with my aunt. She was appalled to see a young couple at the next table in the oblivious midst of a full-on make-out session. I warned my aunt to avoid Rome or face falling into shock over passionately public displays of affection. To me, Rome is the make-out capital of the universe: every park bench, every café, every restaurant, bus stop and street corner. My aunt shook her head in protest, “Well, when in Rome, but not here.” I knew on some level she was right. Rules vary.

The hardest part about returning to the United States for many of us is reconciling that we call two very different places home. We’d love nothing more than to pick and choose, as if ordering off a best-of-both-worlds menu: “I’ll have a punctual bus schedule and drivers who adhere to basic rules of the road, with a side of two-hour lunch breaks and an amazing café atmosphere.”

No matter how much you resist adaptability, you start to drift. And that’s when you find Lean Cuisine, like a great divide.

About the Author: Laura Smith

Laura Smith is an English major at the University of Virginia. She was born and raised in Washington, D.C., and lived in Rome for five months in 2006 while studying literature and photography. She is working on a novel based on her grandmother's life. After she graduates in the spring, she hopes to move back to Washington and continue writing. In her free time, she enjoys reading (Franzen, Hemingway, and Kundera are among her favorites), watching independent or European films, and generally living the college lifestyle.