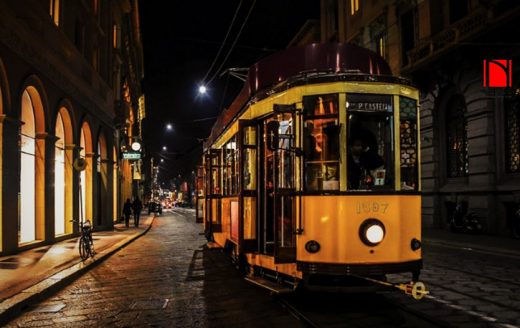 Hen you return to a city you lived in for 20 years, small details have a way of trying to woo you back.
M

ore than a year ago, I moved to rural New Hampshire from Milan, where I had lived for 30 years.

Making the move represented a major life change that many urged me to decide on slowly. “Try it out for a few months,” they said. “Try going back and forth before making the final decision.”

This approach seemed to me like the weaselly way to leave a relationship; the “let’s still be friends” approach. But I like clean breaks, whether in or out of relationships.

Even if the end of my relationship with Milan was both friendly and clean, I was leery, even 12 moths later, about coming back. Like seeing an old boyfriend or crush again, I wondered if my return would unleash uncontrollable feelings. Would I be stricken with buyer’s remorse, or wonder why I hadn’t cut ties sooner? Or would I question why I’d cared so much in the first place?

Now, after 10 days in Milan, I can put all this wondering to an end. For the most part, my “homecoming” has produced an unexpected response. I feel like I never left.

My old doorman greets me as if I’d just stepped out to walk the dog. The sales ladies in my favorite stores still remember clothes I bought years ago and wonder how they’ll look with the purchases I’m making now. The vegetable and flower guys at the market ask if Milan’s recent bad weather has kept me away. When I explain, they’re surprised I’ve been gone for more than a year. At my local grocery, the same lump of blacktop trips me on the pavement and the same homeless fellow asks for change. As I catch up with old friends, the separation could be summer vacation, not a year.

I have occasional moments of panic when I realize my “home” is no longer Milan, and I need a moment to remember where I am staying while here.

The vegetable and flower guys at the market ask if Milan’s recent bad weather has kept me away. When I explain, they’re surprised I’ve been gone for more than a year.

Like meeting that old boyfriend, seeing Milan again reminds me of how many things that once filled my life are now forgotten. For a year I haven’t heard coffee cups and spoons in a bar or seen a beautifully dressed lady pedal majestically across paving stones. I haven’t tasted honest-to-God mozzarella or a two-course lunch in a friend’s home, special treats that were once mundane and underappreciated. These and many other sensations once taken for granted are filed away — glowing shop windows, tram doors banging shut, the smell of the cheese counter — so I can recall them on New Hampshire evenings sitting by the wood stove.

While I have new appreciation for my old flame’s good qualities and habits, I rejoice in being released from his bad ones.

As a matter of fact, it’s been nice to cross the street fearlessly, not to mention breathing rustic fresh air. How easy life is when you don’t have to literally defend your place in line.

I noticed that Milan has picked up some new habits — not all good — and shed old ones. The dog park has been improved. My errand at the registry office was smooth, thanks to take-a-number stubs. Even the waits were short. But at the bank, I missed the old back room where I knew all the employees and everyone overheard my business, small town-style. The new arrangement, which is supposed to feel like a “living room” (as the old one really did) is a sterile white cube. I used to miss ethnic food. Now, cyclists deliver it to your home (and are a new traffic hazard). Flashy “flagship” stores, more like those in Singapore or New York, and nail salons, have elbowed out some of my favorite locally-owned shops.

At times, it’s felt as if Milan was playing my heart strings, as if trying to seduce an old flame back. Was one of the conspirators the Sicilian lady at the post office, who always called me bella gioia, and who, on seeing me again, came out from behind her window to hug me? Did the vegetable guys polish up their array of vegetables I can’t get in New Hampshire as part of a charm offensive to tempt me back? The way the city coyly revealed enticing glimpses of secret patrician courtyards and normally hidden cloisters seemed like a ploy to turn my head after my year in the woods.

My friends definitely seemed in on this plot. In a whirl of lunches, aperitivi and dinners, they plied me with food, laughter and reminiscences. During the joyous chaos of a dinner with friends, I felt a moment of calm detachment. Everything was just as it was a year ago — the house, the food, my friends — and I was taking it all in. At the same time, I knew I no longer wanted to, that I had said my good-byes. Milan and I had had a great relationship while it lasted, and the visit was a reminder. But now more than ever I knew it was over.