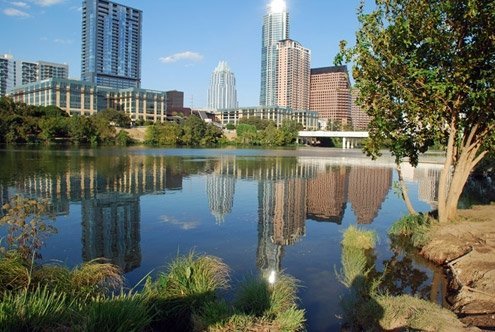 Get cracking with crab while overlooking Lady Bird Lake.
I

’m jet-lagged in an incredible Texas “village” called Austin where the 1960s seem to have jumped off time’s trolley and decided to stick around. Everyone here is nice, hip and pleasant. Food? Take your pick from great sushi and luscious rib eye steaks (so tender you don’t need a knife), not the Austin branch of Joe’s Crab Shack that overlooks a Colorado River reservoir known as Lady Bird Lake, after the Austin-born First Lady Bird Johnson. It’s a beautiful sight.

Jetlag doesn’t apply to eating, at least not with us.

At Joe’s, we exhausted ourselves by first taking up weapons —metal claw crackers and extremely effective yellow plastic picks — and then attacking two crabs the size of a Chihuahua (a Dungeness and a Snow). We also ploughed through an entire roll of organic paper towels placed on the table along with a large metal bucket just for the leavings.

Before getting started, our smiling waiter draped us with bibs printed with the words “Get Crackin,” and so we did, methodically dissecting bodies and claws. In the background, the sun set over the lake yielding an amazing Texas sky that changed from pale blue to pink to black, finally punctuated with a sliver of bright moon.

The next night we chose Perla, a fresh-out-of-the-water seafood restaurant (the website gives you a good sense of the place). We tasted six kinds of oysters, including West Coast Kumamoto and Kusshi, sweet as branch water. We segued into a pan roasted halibut cheek and a ceviche of fresh shrimp and sea bass with avocado and cilantro. A salad of sweet baby lettuces from local farmers was delicately dressed with lemon, mint and olive oil, then tossed with finely slices of sweet red Texas onions.

As a Texan going home for the first time in years, and as a one-time La La Land dweller, I was smitten with Austin’s hospitality, warmth and lack of self-consciousness. Every other door on South Congress Avenue seemed to lead to talented musicians on guitar, fiddle, bass and piano. Austin seemingly non-stop nightlife continues on its streets, where street-corner soloists with banjos or ukes mourn lost loves for quarters or dollar bills. I saw a skinny teenager slumping along wearing a tee that with the line: “Because you’re mine, I walk the line.” Marvelous…

Austin me feel like I’d gone back to the hippy, tie-dyed, ponytail days when flower-love-children ran things and there was revolution in the air, or so we thought. In today’s Austin, the ponytails are — well — greyer, and the revolution is against thoughtless waste, fast food joints, and bombing innocents in attempts to control dangerous regimes.

Growing up in post-war Texas, where society Junior Leaguers played bridge at the country club and deep lines were drawn between black, brown and white, the changes gladdened me. In this part of central Texas, equality is now more important than ego. It matters that you’re human, kind, generous and adventuresome. The traits seem like the new norm.

When I first got to Austin, I couldn’t get the name of Thomas Wolfe’s famous 1940 novel, “You Can’t Go Home Again,” out of my mind. His idea was that we all mythologized our roots. But they still grow deep, wherever you might plant them. The new generation of Austenites, I discovered, has an awful lot in common with my beloved Italians.

What higher praise for a town with a crop of bumper stickers and shirts that read, “Keep Austin Weird.” It’s my kind of town.