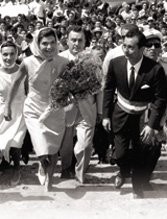 Jacky Kennedy greeted in Amalfi, 1962.
A

fter a two-year absence, I returned to Rome on a half-empty Alitalia flight. The plane door had closed, and I had lost myself in the delicious contemplation of the two vacant seats beside me, when an elderly Roman couple approached and noisily began to clamber over me. The woman ignored the recorded exhortation to place her hand luggage under the seat in front of her, and I surreptitiously kicked it out of the area at my feet that it was encroaching upon.

The man pressed so many buttons on the remote governing the paltry entertainment selection that the screen froze, drawing an angry lecture from an exasperated flight attendant. They interrupted my reading to offer banal observations about the flight, the weather, and the tipo di carne during dinner. And then they offered me a chocolate-covered cookie, ignoring my protestations that veramente non mi andava un biscotto. I melted. I was sure they would have given me the shirts off their backs had I asked. I was home.

My boyfriend asked me not long before we left for our trip, “How long do you have to stay somewhere before you’re really of that place?” I had no answer. While I lived in Rome, I certainly never considered myself Romana, though if anyone asked, I wouldn’t have said I was “di New Jersey,” where I went to college, or “di Connecticut,” where I grew up, or “di New York,” where I had spent a couple of summers.

Aboard the train from Fiumicino to my friends’ apartment near Piazza Bologna, I felt an old tug. Rolling by the ugly apartment buildings abutting the tracks, listening to the up-and-down Milanese cadence of a woman’s voice on her cell phone, I did feel, for a moment, “d’Italia.”

Returning to a place you once called home is hard. You make wrong turns; the palazzo you swore was on the angolo just ahead has disappeared.

Retreading the same paths transported me back to 1996, to 2000 — only it was 2004, and I, like Rome, was different. I was there with someone new. There was a palpable distance, both physical and emotional, between myself and Rome.

The city itself seemed a touch more frenetic, more “open to the West” (read: American), as a friend put it as we sipped coffee on her terrace in Garbatella. Maybe it was the exorbitant prices, or maybe it was me, used to the so-called New York minute and pressed for time even on vacation, as I tried to cram in social and professional obligations.

In a taxi one night after dinner, as we sped from Via dei Banchi Vecchi through the garishly-lit Piazza Venezia and up to Via Nazionale, I grabbed Andrew’s hand, closed my eyes, and listened to the soporific sound of the cab radio calling out pickups: Quattro Novembre centotrentasette, Stazione Trastevere, Via delle Coppelle cinque Ristorante Quinzi, Via Mameli cinquantuno, Via Mameli cinque-uno, Trastevere Via Mameli cinquantuno. I wondered who was waiting there on Via Mameli, and how many passengers, over the years, had heard my own address called out in the singsong voice of the taxi auctioneer, and if they ever thought about the person on the other end of the phone, waiting patiently at Borgo Pio 39. I remembered the way a friend would wave goodbye to me and rap on the driver’s window as the cab pulled away from the curb, curtly saying “Mi raccomando,” to warn the tassista that he was not to mess with the signorina making her way back home.

That was the thing about coming back: Everything I did called up a memory, some of which I hadn’t thought about in so long I felt light-headed for a moment, and wondered where I was, and when. The smell of burning wood brought to mind a reporting trip to Assisi, when I wandered the streets on a winter evening, inhaling the same smell, looking for a quiet place to eat and read my book. The constant sound emanating from bars of porcelain cups roughly clinking against saucers recalled my daily 10 a.m. cappuccino with office-mates. It’s not a sound you hear in New York, and I had forgotten all about it. Yet as soon as I heard it, it seemed so natural, part of the fabric of everyday life.

The U.S. is obsessed with “moving on,” with seeking closure from the past. We aim for personal reconciliation, and glorify the opening of new chapters, and the closing of the book on old ones. Italy, where the past can’t help but seep into the present, defies that at every turn. They say you can never go home again, and perhaps you can’t, but the act of returning both severs and refastens old ties, stirring up ambivalent emotions and making you question what home really means.

— Benedicta Cipolla lived in Rome between 1995 and 2001. She now works in the magazine industry in New York City.