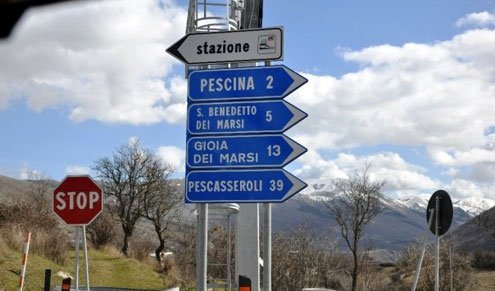 The crossroad before Pescina. Photos by Amanda Ruggeri.
L

ike so many other highway signs in Italy, this one baffled: Pescasseroli, 39 kilometers. Gioia dei Marsi, 13. San Benedetto dei Marsi, 5. And at the top: Pescina, 2 kilometers. The arrow pointed right. I turned.

My grandfather’s family had fled Pescina after an earthquake felled their fig farm in 1915. They were the lucky ones; the quake also killed 5,000 of the town’s 6,000 inhabitants. Arriving in the United States at the age of 14, my grandfather would speak in broken English up until he died, his Abruzzese accent thickly frosting the adopted language he’d spoken for nearly 70 years.

As an Italian immigrant, language was just one of the challenges he grappled with. Even his name proved a conflict; he changed it from “Grazio” to “George” shortly after his arrival. (Luckily, a simultaneous switch from “Ruggeri” to “Rogers” was later rethought). When he had his own son, it would be that Americanized name, and identity, “George,” that he’d sandwich between the stars-and-stripes “Dennis” and the all-Abruzzo “Ruggeri.”

Naming wasn’t the only way in which my grandfather’s family forged a new identity. Like so many other immigrants, they recreated themselves in the United States with new jobs, new clothes, and the kinds of houses that their cousins back home still dreamed about.

They showed off their American wealth by eating the Italo-American staple, spaghetti with meatballs, in artery-clogging proportions. They took their American car out for long Sunday drives to visit their other (Italian) relatives. They wrote to second cousins back home and carefully filed away their yellowing photographs. But they never returned.

Now, 87 years later, I was approaching the town that they had left behind. I braced myself: Perhaps I’d understand, in a glance, the aesthetic reasons why they’d stayed away.

But as I came around the curve toward Pescina, I squinted. A medieval tower stood guard on the mountain overlooking the town, its ruins projecting toward the sky with weary but straight-backed stone. One terracotta roof after another jumbled together in the valley below, stretching apart just enough to let a river run through it. Somewhere, sheep bleated. I looked down to see a green stretch of hillside covered in little wool bundles. The man herding them raised his head to look at me in surprise.

On a Sunday, the town looked like a set for a 1950s movie after the cast has gone home. Shops were shuttered. The letters of the “Pescheria” and “Café” signs, in the same hokey font as that of “vintage” T-shirts sold at hipster stores across the States, were faded. An old man in dress pants and a puffy jacket slowed his pace as he passed me, suspicious. Half an hour later, a carabinieri patrol car would give the same once-over, squealing to an uncharacteristic crawl as it went by. I wondered if they’d been called to check out the intruder.

At the edge of town, I climbed up toward the tower. The air smelled of wood smoke. The wind rushed loudly through the trees, softening the toll of the church bells below. Beneath the ruin, stone houses were carved into the mountainside. From far away, they’d looked like a row of deadened molars. Now, I saw that their roofs were long-gone, their insides emptied; forests of weeds had grown where beds and tables once stood. The earthquake of 1915. Gingerly, I stepped inside one ruin that had recently been renovated, apparently in vain. Glass crunched underfoot as I walked through a graffiti-sprayed living room, and in the bathroom, a half-shattered, modern toilet clung to the wall. The earthquake of 2009, I thought. I could see, now, why my grandfather had left.

I was still curious if there were more of us around, or if every member of the clan had fled either abroad or to Rome, where the telephone book is packed thick with our bloodline. Over coffee in a café, I asked the bartender if he knew of any Ruggeris in Pescina. With fewer than 5,000 people living here, surely he’d know them if there were. He did. “Certo,” he said, smiling as he shrugged. “Ci sono molti.” Out of the many Ruggeris, who was I looking for, exactly?

I didn’t know. As I left the café, I peeked through a backroom. Seven or eight elderly locals sat playing cards. Perhaps one of them would know. After all, an Italian’s memory runs long; remembrance of local knowledge runs even longer. But I ducked away, feeling shy.

The woman who checked me in at an agriturismo later that afternoon, a half hour’s drive away, immediately recognized at the name on my license. “Ruggeri. Pescina,” she said. I nodded. My grandfather grew up there, I said, but left after the earthquake of 1915. She audibly flinched, sadness chasing a stranger’s disinterest from her face, and said no more.

Whether she winced because of the earthquake’s devastation a century ago or because the town had never recovered since, I couldn’t tell. But the look on her face was as fresh as if 1915 had been yesterday, and the generations, my grandfather among them, only just starting to flee.