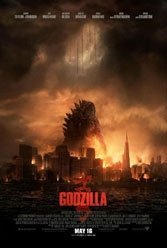 All that’s really noteworthy about Welshman’s Gareth Edward’s take on the Godzilla monster mash is current events. The original 1950s beast was a post-Hiroshima Japanese meditation on nuclear testing. This time, Japan’s toxicity is updated as a result of the 2011 earthquake and tsunami that swamped the Fukayama nuclear reactor, sending the world into hysterics. Here, Joe Brodie (Bryan Cranston) is a scientist at a Japanese nuclear plant stricken by a quake in the Philippines. He loses his wife in the catastrophe and turns into a conspiracy theorist suspicious of the quarantine zone the Japanese impose after.

Enter his military son Ford, a boy when the first disaster first struck, now tasked with peeling his zany father from his Japanese crusading. Not so fast, because 15 years later good old (grieving) dad is actually onto to something. And off we go to the special effects races, with familiar Godzilla and slimy Harpees doing battle. Sure, there are twists (1950s nuclear tests weren’t a U.S.-Soviet game of nuclear one-upmanship but a joint effort to kill the monster), but big Godzilla is a plot-eater. With radiation-craving sexy beasts on the loose, boy wonder, suddenly minus dad, along with Japanese scientist Ishiro Serizawa (Ken Wantanabe), must win the monster war amid panic, pandemonium and urban devastation (Honolulu, Las Vegas, San Francisco).

Godzilla is the nicest and most heroic of a rather loutish monster lot. Its eager-to-mate adversaries are lock-stock-and-barrel from the spindly post-“Alien” school of clicking cockroaches. Add predictably silly hyperbolic dialogue (“It’s trending exponentially!”/”Jesus, it’s worse than we thought!”/”It will be looking for food.”/”Warheads are on the move”) and you get a competent if entirely predictable version of a 21st-century matinee, with maudlin family values wrapping it up. If only the whole offered up a dash more humor, but it sadly (if not monstrously) sets all that aside in favor of darkly large but sometimes visually indecipherable combat.