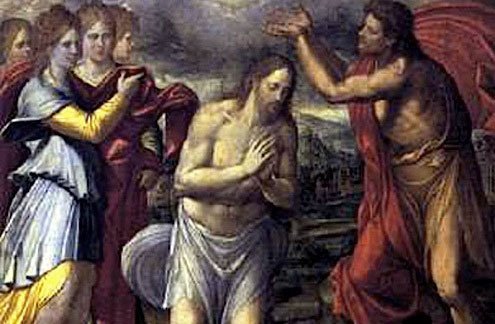 Juan Fernández de Navarrete's "Baptism of Christ" in the Prado.
I

am a bad Catholic. Or, so I came to find out just recently, I’m not even Catholic. This all came about a few Sundays after Fabio and I came out of Mass.

Fabio, my boyfriend headed straight to the bulletin boards, unbeknownst to me, to check out when marriage classes begin.

“Solo per sapere,” he said.

“Not for any special reason,” he said. He just wanted to know when they began.

But before he takes the marriage classes, he says he must be confirmed.

In saying this he then looks at me and asks, “Have you had your confirmation?”

While I thought we’d already had this discussion, it became increasingly apparent we hadn’t — not based on his reaction to my response.

“No, I haven’t. Actually, I’ve never even been baptized,” I told him.

His response came fast: “How can you not be baptized?”

I’d never considered it so important. I told him my mom, who is Methodist, and my dad, who is Catholic, always wanted to give me the right to choose the religion I wished to practice.

“I wanted to leave it up to you to decide whether you’d be Jewish, Muslim or Catholic,” my mother would say. Fabio found this strange.

It was obvious there was no getting around the question.

“Well not everyone,” I said firmly. “I haven’t been baptized.”

He was puzzled. He did what he typically does when he can’t figure something out. He called his sister on his mobile. And for 15 minutes they discussed my newfound non-baptized state.

“But how are we going to get her baptized?” he asked his sister. “She’s a bit grandicella, don’t you think? I mean, she’s a little old to dunk her head in that tub of water?”

Mind you, this was happening in front of our church.

A bit too much.

“Can we please not talk about this right in front of everyone coming out of Mass?” It wasn’t that I was embarrassed. I just felt uncomfortable. Even more so because I felt that for the first time I had to defend my beliefs.

Just because I wasn’t baptized doesn’t mean I don’t believe in God. Growing up, I went to a Christian summer camp for five years. We memorized Bible verses and sang gospel songs. During the same period, almost every Sunday I went to church with my friend Kelly, who was Baptist.

Needless to say, God has always been a part of my life. I’ve just never had to justify it. And to be honest, it’s just something that I’ve always considered private — until now.

Well, all it took was 15 minutes for all of Fabio’s home town in Calabria to get wind of the news. Fabio’s mom called.

“What do you mean she’s not baptized?” she asked. “No mamma. Her mom is Methodist. Not Atheist,” he explained.