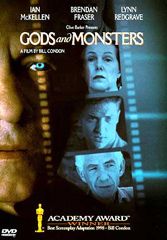 Condon sets his film in 1957, in Whale’s full-blown Hollywood twilight. He’s suffered a stroke and lives alone, tended to by his maid Hanna (Lynne Redgrave). The appearance of former Marine Clayton Boone (Brendan Fraser), a buff gardener, sends World War I veteran Whale into a lusting abyss of excitement and despairing remembrance. Boone triggers a flood of endorphins that make the alcoholic Whale all the more inclined to resist his impending mortality.

Given the task of inhabiting torment, no one is better than McKellen. He rages and cajoles, woos and bickers, begs and weeps, all in a queen bee effort to get Boone to model for him. “This is my gardener Clayton Boone,” he tells Princess Margaret at a cocktail party. “He’s never met a princess before, only queens.”

It’ll all end badly, that’s apparent from the start, but the gloaming doesn’t stop Condon (he made “Kinsey” in 2004) from dredging up Whale’s loud muck.