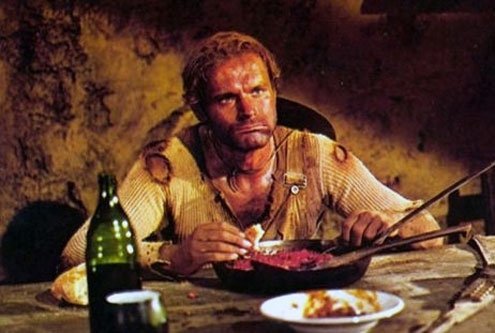 Terence Hill and his beans... but where are they now?
T

he night before leaving for the United States, I couldn’t sleep. Anticipation can do that. I’d wanted to visit the American Southwest for years. Now, I’d finally convinced my American wife, and we were headed for our own version of the Grand Tour. Over two weeks we’d drive from Las Vegas to Zion National Park, Capitol Reef, Arches, Mesa Verde, Monument Valley, Grand Canyon, Flagstaff, Sedona, and the Hoover Dam, before returning to Las Vegas. It’s a classic 1,400-mile route made up mostly of endless highways that push ahead under a relentless sun.

As an Italian who loves to sample local delicacies whenever I travel, I couldn’t wait to begin gastronomic tourism in the American Southwest.

Las Vegas We spent the night at the Tuscan-style Bellagio, which I admit made me feel closer to home. The hotel’s famous buffet immediately got my attention. Food from around the world is trucked in daily, with a quality-control staff on duty. Lunch runs $22 a head. (In Rome, a pizza, bruschetta and beer costs a minimum of €20.) The Bellagio buffet offered sushi, Chinese, Italian, French, and Mexican dishes, meats of all kinds, salads, and exotic fruits. The dessert selection was diabetes-inducing. Beverages came with the meal (alcohol costs extra). It seemed to me a like modern-day Dante bolgia in which gluttons die from overeating – for Dante, the punishment fit the crime.

Overabundance aside, I was distracted by Red King Crab which I’d never eaten before. A few months earlier I’d seen an unsettling documentary on the crab industry. They’re caught in winter in the treacherous ice-cold waters off Alaska, trapped in giant cages that often endanger even the fishermen. But pangs of conscience eventually gave way to plate of salt-water boiled crab legs with a sweet sauce that tasted a little spicy ketchup. A delicious meal.

Zion-bound Headed for Zion National Park, we stopped for an “on the road” breakfast at the Muddy River Bar & Grill. It didn’t take much to lure us in, just kitschy sign with the words “GOOD FOOD.” We decided to have a look.

Once inside, we saw an Italian couple. A good omen, I thought. Then (along with coffee) came large, fluffy pancakes, and French toast. Even the fake maple syrup was tasty. Pancakes rank high among America’s exports. I used to think I was being very American by demanding original maple syrup. This trip proved me wrong: most Americans prefer the cheaper, corn syrup-laced kind.

A word on coffee: Though American coffee has no real relationship to espresso, I still like it. While most people think espresso is stronger than American coffee, the truth is that while the taste of Italian coffee is more intense, espresso’s caffeine content is lower than that of its American brother.

The diner made good on “GOOD FOOD.”

Zion We dined at Oscar’s Café, in Springdale, outside Zion National Park, a Tex-Mex and burger place with some vegetarian favorites. I ate a free range chicken enchilada, a guacamole and beans salad, and corn chips with chili sauce. I also took another American plunge: fried onion rings.

The blue chips surprised me. As it turns out, blue corn contains more protein than the more common yellow corn. The Pueblo Indians use it in their famous blue cornbread, as do the Hopi in their delectable blue corn and tree ash piki bread.

According to Navajo legend, the fluttering wings of a giant turkey made blue corncobs fall to earth. Blue corn use became widespread throughout the United States in the 1980s.

Another ubiquitous ingredient are chili peppers (berries, really). Maturity deepens their color. The most mature are red chilis; yellow and green chilis are younger and less spicy. The spiciness of chili is measured in Scoville heat units (SHU). The SHU of a chili represents the number of times chili extract must be diluted in water before it loses its natural heat. You don’t want to bite into Mexican habañero chili by mistake.

Chili peppers are also popular in Italian cooking. Take Rome’s penne alla arrabiata, its “rage” based on fresh chili. Calabria is home to some of the most pungent Italian chili, used in spicy induja sausages.

Oscar’s Café put Calabria to shame. I unwisely decided to munch on what I thought (size-wise) was a bell pepper. My mouth was suddenly introduced to the Scoville scale.

Bryce Canyon Honesty is the best policy. The “Vegetarian ragout over polenta” I ordered at the Bryce Canyon Lodge left me perplexed. The ingredients were promising enough – baked polenta topped with tomatoes, eggplant zucchini, yellow squash, carrots, onions, garlic, and Italian spices. But the polenta had that instant, supermarket flavor. And here we were in the American Southwest where corn is a staple.

Another thing. What happened to beans? After corn, beans should rule the southwest roost. But aside from their Tex-Mex presence, I didn’t come across a single restaurant that featured beans. True, they were poor man’s food during the American Depression and never recovered from that reputation, but why deprive a region of a staple?

Many of the beans grown in Europe today have southwest roots. Native Americans cultivated and ate them first. For Italians, pasta e fagioli, beans and pasta, is apple pie. I suspect that even Italian movie cowboy Terence Hill (okay, he was really Venice-born Mario Girotti) would have struggled to find a pot of beans if the Wild West of Italian Spaghetti Westerns had been anything like the New West that I found.

Mesa Verde The Mesa Verde Colorado Restaurant at the Mesa Verde State Park gave me a chance to sample a more original approach to local ingredients. Chef Brian Puett made a delicious “Turkey Napoleon” tinged with sweet-and-sour sauce, spinach and chives. We also ate salmon with polenta and chili, a salad with crispy tacos, and a house original, “pasta with cream of mushroom and dried cherries.” Though I usually don’t like sweet flavors on pasta, this was delicious. The dried cherries rounded out the mushroom sauce. Most of all, I admired Puett’s willingness to stay local, using the fruit of the land and avoiding the standard Tex-Mex and burger offerings.

Strangely, salmon was just about the only available “dinner” fish. Greenpeace wouldn’t be thrilled. It says the salmon glut is damaging ecosystems. Farming salmon also means feeding them, which sucks the seas dry of herring and sardines.

Sedona The only restaurant where we found something beside salmon was Shugreu’s Hillside Grill in Sedona. Though renowned for its seafood, the menu yielded only catfish, soft shell crabs and, yes, salmon (that’s aside from the singing trout that greets you when you walk in). I picked catfish and crabs. It wasn’t my first experience with catfish, but Shugreu’s spicy catfish with black pepper and cinnamon with wild rice was something special. The soft shell crabs were good, though I wouldn’t have put them in hamburger buns. The bread deadened crab meat taste. In Italy’s Venetian lagoon, soft shell crabs are called moeche and are considered a delicacy, often eaten together with white polenta.

Flagstaff Maybe our most enjoyable meal was at the Annual Navajo Festival held at the Museum of Northern Arizona in Flagstaff. Listening to traditional songs and dances, we mingled among vendors selling Navajo artifacts. Cooks grilled corn and prepared deep-fried Navajo frybread (topped with pinto beans, red chili sauce, cheese, lettuce, onions, and tomatoes). The frybread reminded me of Pizza Napoletana which was peddled by Naples street vendors beginning in the early 19th century. Despite different times and cultures, it struck me how the Navajo and the Neapolitans both made a dish that’s still being eaten today. It’s as if the kitchen bore witness to our joint roots.