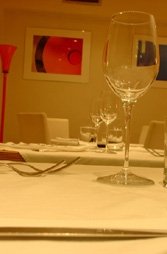 Tastes of the Mediterranean south.
I

nteresting what New York Magazine had to say about these folks: “After a few days of cacio this and pepe that, you may well crave some non-Roman fare.” Interesting approach. But honestly this isn’t so much “non-Rome” as a nouvelle southern twist on old flavors and dough (consider panella Siciliane, which, consistent with Middle Eastern influences, is bean flour hummus fried and served with Gazpacho).

The tagliolini come with shrimp, cherry tomatoes and a pinch of lemon; the orecchiette are garnished with Sicilian broccoli, peperonicino and grana, small chunks of parmesan; the gnocchi is garnished with mint and zucchine. Beef steak (filetto di manzo), meanwhile, has an almond tangent and with a paté of dried tomatoes. Rolled swordfish involtini are served with pinoli, cous-cous, grapes and tomatoes. Afterwards, sip on a light limoncello or a thick amaro, sweetness to counter richness of the meal.

All and all, less a Rome exodus than an elegant diversion. The location is nice, in the Trieste neighborhood near Mussolini’s famous Villa Torlonia, a verdant area of the city too often overlooks. The décor is smooth, the owners from the south (Catanzaro via the States for one), and they take their food seriously. The downside is a kind of forced upscale, which means a fair amount of cash based on presentation more than drop-dead-great quality.

If you’re a chance-taker with euro to spare, by all means drop in. Owner Raffaele Giuditta, known as “Ghigo,” worked at Les Halles in New York, which may account for the cosmopolitan flavor in food and mood. If you’re on Metro, it’s an easy walk from the Pizza Bologna stop on the Blue Line.