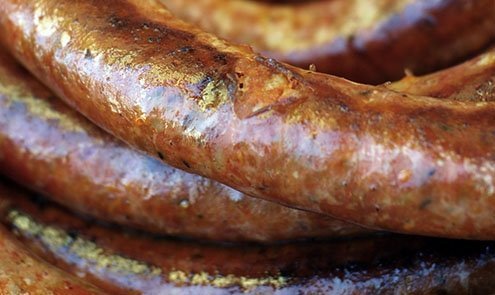 Boudin, or blood sausage, is not for the faint of heart.
I

taly’s snowcapped mountain ranges — the Alps, Apennines and Dolomites, to name but a few — play host to some extraordinary cuisine.

Italian mountains have strong cultural identity. Traditions and economy are based on farming, cheese making, and woodworking. Tourism began growing in the early 20th century and expanded after World War II to become the dominant industry. But in montagna, sumptuous traditional cooking can be just as important as ski slopes.

While olive oil is a staple throughout Italy, butter takes on greater importance in the mountain uplands. Local cuisine has Hapsburg and French influences. Climate, politics and geography all contribute to a lesser-known but rich array of food. Here are just a few Alpine specialties.

Speck Native to South Tyrol, speck, born in the 13th century, is a spiced, smoked and dried ham variety made by marinating a pig’s hind legs for two weeks in spiced brine. The meat is dried and smoked for another two weeks, then hung to age for four months. The result is a delicious and unique balance of savory and smoky notes. Speck is eaten as is, plucked from grazing boards, or used in recipes as an ingredient.

Canederli, a representative dish of Trentino and Südtirol, are dumplings made with stale bread and minced onion.

Canederli The most representative dish of Trentino and Südtirol, canederli are scrumptious dumplings made with stale bread, minced onion, with eggs binding it all together. These Austrian-inspired orbs are tremendously similar to Jewish matzo balls, likewise cooked and served in broth, save for the addition of bits of speck mixed in with the bread pulp.

Another way of serving canederli is asciutti, that is not in broth but rather drained and served doused with brown butter and grated Alpine cheese.

Polenta “Polenta,” M.F.K. Fisher wrote in her masterpiece “How to Cook a Wolf,” “is one of those ageless culinary lords, like bread. It has sprung from the hunger of mankind, and without apparent effort has always carried with it a feeling of strength and dignity and well-being.”

After Columbus returned to Europe with maize from the Americas, the cultivation of the New World crop expanded to Italy. Corn was rapidly adopted, especially in the northern Italian regions where it became a peasant staple, in part because it was cheaper than the wheat normally used for bread, but also because of the sense of earthiness the dish provided.

Peasant tradition established the custom of eating polenta poured directly on the common table with all the family gathered around. The polenta was spread on the wood table, with a single sausage placed in the center. This was usually the only protein and rich meat available that day (or week). Guests nibbled inward, consuming the section of polenta in front and tunneling their way to the middle of the table towards the sausage. Whoever could get to the sausage first, wiping the table clean, was hailed.

Fonduta Fontina is an Alpine-style cheese made in the Aosta Valley since the 12th century. It is somewhat creamy and has a pale yellow paste with very small holes and a rather springy texture. The flavor is mild, nutty, herbaceous and fruity, with hints of honey and melted butter. The name fontina derives from the French verb fonder, to melt. Fontina is the base for Fonduta, the Italian traditional cheese fondue dish, which is made with melted and whipped Fontina added to eggs and milk. Fresh bite-sized vegetables and chunks of toasted bread are dipped directly in the fonduta pot on the table, which is kept warm by a small burner. The dipped foods are retrieved with long skewer forks and devoured in collective elation.

Bagna Cauda This “hot bath,” as Piemontese dialect suggests, is an appetizer dip that’s eaten with raw, boiled or roasted vegetables similarly to fonduta. It is prepared as a heated blend of garlic, butter, anchovy and olive oil, and can be served in individual dipping bowls, or placed in a larger earthenware pot, placed on a burner at the center of the table, for communal dipping.