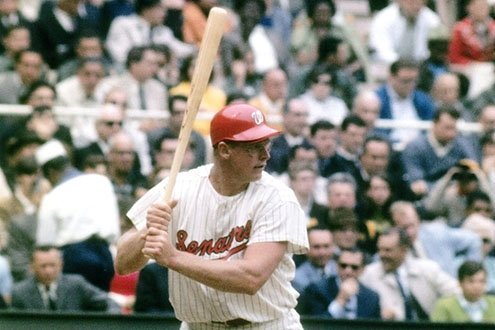 ight presidencies ago I threw out the first ball at a doubleheader between the Washington Senators and the Detroit Tigers. My father had won a contest while shopping for a washing machine and handed the prize to me, his second in command. “You’ll enjoy it,” my father said, and the next month we took the streetcar part way to the stadium. Once there, I was whisked into a back room, introduced to a big man with a uniform, Paul Casanova, the catcher, and told where to stand. I was also given a ball I eventually threw less than three feet, but Paul Casanova forgave me that, and even told me to ignore the laughter from the crowd. The Senators promptly lost both games and we went home and had meat loaf for dinner.

As always, my father talked politics — as if the afternoon games had never happened. The president at the time was Lyndon Johnson, who’d been the wiser choice in the election that followed the Kennedy assassination, since his adversary, a man named Goldwater, might turn trigger happy (or so everyone said) and probably belonged secretly to the John Birch Society, which I was supposed to know all about but didn’t. The evils of the planet confused me. And sometimes made no sense. If this man Goldwater had lost the 1964 election badly in because of his sinister intentions why was it that Kennedy had nearly gotten into a nuclear war with the Russians because of Russian missiles in Cuban — or something like that? And why was it that Johnson was obsessed with a small country in Southeast Asia? Was the county a John Birch outpost? Would Birch be running for president?

My sense of global confusion was great enough to make me seek comfort outside my father’s political domain, otherwise known as our house. I tried playing in the grape vines the back yard but my father invariably appeared to announce some new and ominous vision and warn of the coming apocalypse. One day, playing with Byrne and Sarah, he told all three of us war was coming to the Middle East, which would lead to World War III, which would mean the end of the world, to which Byrne asked about his bicycle and my father informed him the bike stood no chance at all. Byrne started sobbing, Sarah fled, and a bilateral meeting of parents was later convened to calm the waters.

When I asked my father if we could attend another baseball game even though we hadn’t won a contest he informed me that nuclear war was inevitable, which I took as approval. I decided to go before it began.

Soon, it became a habit. Every weekend in the afternoon I’d take the tram and walk a little to D.C. Stadium where I’d watch the Senators, who lost constantly, making me feel much better about my fate and that of the world. I didn’t think much about John Birch, not at the stadium. I focused instead on a giant of a player called Frank Howard who hit home runs that traveled across the ocean, probably landing in already bedraggled Southeast Asia. He became a hero whose titanic antics pulled me away from the noise of the adult abyss. I followed everything he did with a devotee’s attention.

When my father began talking to me about Charles De Gaulle, Konrad Adenauer, Franco, and the concept of overkill (roughly in that order), I’d drift in mind to where the stadium was and Frank Howard took mighty swings and Paul Casanova, the cheerful catcher, would greet him ebulliently at the plate. I knew of course the planet was about to explode, that John Birch was knocking at the door, that things weren’t like they used to be (or so said my father), but decided then and there to complete my adolescence notwithstanding. Who knows, I told myself, there might be a few more seasons of baseball before Armageddon. And, though the end remains near, there have been.