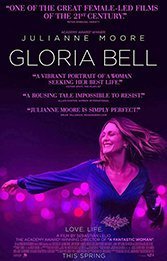 Those who see “Gloria Bell” hoping to recognize Los Angeles (where the film is set), its landmarks, even its funky ordinariness, will be disappointed. Oscar-winning Chilean director Sebastián Lelio (“A Fantastic Woman,” 2017) has pointedly removed the city from the film. Not only are urban backgrounds repeatedly out of focus, but when they aren’t — Los Angeles International Airport is a case in point, the Westin Bonaventure Hotel another — the camera avoids anything stunning or historic, rendering iconic LAX as if it were in Des Moines or Toledo, and the space-age Bonaventure as if it were a Holiday Inn. The result is to deprive the middle-aged protagonist, Gloria Bell (Julianne Moore) not only of LA’s sense of openness and possibilities — it’s a symbol of the American Dream, after all — but to envelop her, instead, in a series of claustrophobic worlds — the discotheque, the automobile, the floor of a Vegas casino — that restrain her and turn her inward.

That could make for a bleak, depressing film, and to be sure, Gloria’s life as we see it solely from her point of view (Moore is in every scene) is not what she would like it to be. She’s regularly abandoned by those around her: a daughter moves to Sweden, her ex-husband has remarried, the only friend in her antiseptic office gets fired, and her son–cool and removed —doesn’t let her care for her grandson. A disco-born relationship with Arnold (an unusually reserved John Turturro) is put to the test when he leaves her, without a word, not once but twice.

Attractive but not gorgeous, Gloria is at ease in the disco, where she enjoys dancing with strangers and is on the lookout for a mate, or just sex. She takes a laugh therapy class, gets a bikini trim, tries yoga to be closer to her daughter, and sings along to music (a trifle too poignantly, one of the songs is Gilbert O’Sullivan’s “Alone Again [Naturally]”). When Arnold, who can’t let go of his overly dependent ex-wife and adult daughters, earns her wrath, she confronts him — twice — in dramatic fashion.

Early in the film, Gloria describes her life as “happy some days, unhappy others.” But it’s more than that. For all her disappointments and struggles, Moore’s Gloria is a complex persona who tackles late middle age and loneliness with determination. To the extent the film gets beyond the usual “middle-aged lonely woman looking for something better,” it’s because one seldom knows how to interpret the various elements of Gloria’s quest for happiness and fulfillment. Should she find another job? Stay away from the disco? Be less body conscious? Let Arnold apologize? Realize that singing in the car is less cure than symptom? What’s the deal with the oversized glasses she wears — even in the pool —and then, in the film’s final scene, removes?

“Gloria Bell” is a small, medium-is-the-message film that displays the protagonist’s ordinary life with its own plodding ordinariness. It’s saved by a reserved, nuanced performance by Moore and an admirable refusal to resolve the problems it raises.