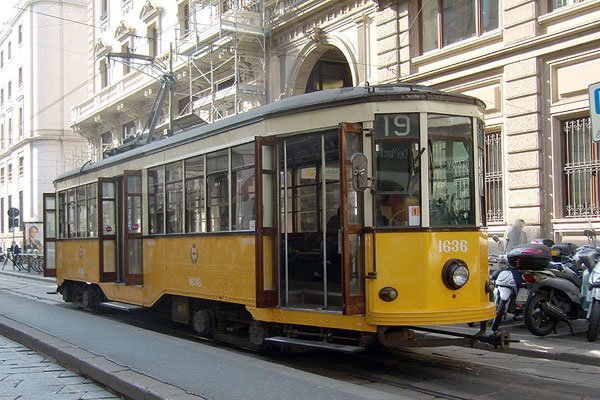 Trams are a common sight in Milan.
T

he name “Milan” derives from the Latin Mediolanum, which you could loosely translate as “the place in the middle.” Today’s busy city was originally a Lombard settlement and later a Roman encampment that marked the midpoint where the major East-West and North-South European trade routes crossed. There is no glorious founding myth at Milan’s heart; just a pragmatic mix of convenience and commerce.

By character, Milan tends toward moderation and avoids extremes. Consider how the subtle and sober designs of Lombard fashion design natives Giorgio Armani and Gianfranco Ferré contrast with the dazzle of Gianni Versace and Dolce & Gabbana, whose roots are in Calabria and Sicily. Milan’s artist is Leonardo da Vinci, with his barely-smiling women and drawings of things that work. Its film director is Michelangelo Antonioni, not Fellini.

Milan brings no love story to mind, nor has anyone written a romantic song about it. Hopeful lovers don’t throw coins in Milan fountains (it doesn’t have many) or leave their hearts there. Milan doesn’t call for wearing flowers in your hair or make you long to be there in April.

In short, Milan is not a torrid love affair kind of city. Instead, it’s a “time to settle down” kind of town, one you turn to when you’re ready to trade the excitement of madcap love for someone who always shows up on time and makes soup when you’re sick.

Some would consider the latter relationship a passionless compromise. But what’s wrong with eschewing occasionally ecstatic peaks for the kind of steady drip of pleasant moments Milan readily offers? My last 48 hours in Milan — where I settled 25 years ago — yielded several such moments.

After 10 days of afa, the stagnant, humid heat that is a Milan summer staple, thunderstorms cleared the air. Fresh breezes blew away the clouds and revealed the Alps, the city’s beautiful backdrop, which at times seem to lie at the end of busy Corso Buenos Aires.

The storms brought blue skies, the best kind for showing off Milan’s jewel — the Duomo. Its cathedral’s lace stonework and golden statue of the Madonna glittered against a sky the color of the Virgin’s mantle.

My last days offered perfect weather to Milan cyclists, the world’s most elegant. No rain spattered footwear and it was warm enough to ride without coatless. At the same time, it wasn’t so hot that the men pedaling to work needed to worry about sweat marring their perfect tailoring. Colorful summer dresses fluttered as well-dressed women pedaled to the market or work, their colorful pedicures and sparkly sandals flashing in the bright sun.

In the hardware store, I heard my last conversation in Milanès. I always enjoyed the rare chance to hear the local dialect, which sounds curiously French. Such conversation affords a tiny window into Milan’s past, when Milan was a minor city in the Austro-Hungarian Empire and standard Italian had not yet bridged the myriad dialects brought by immigrants who came here seeking work.

While doing errands, I passed La Scala, which I suppose belies my theory about Milan and passion. The devotion of Maria Callas’ devotees and her own tempestuous love life generated passion to spare for a city that hosted her often during her peak postwar years.

My La Scala favorites were not the passions of Verdi or Puccini, but the subtler shades of Mozart; “Le Nozze di Figaro,” or “Don Giovanni,” so I have always had a soft spot for the Church of San Marco a few blocks from the opera house. Young Mozart, in the tow of his father, ever hopeful of patronage, stayed there and composed his Milanese string quartets in 1772 and 1773.

I just vacated the last of the three Milan homes I lived in over the years, each near the city’s Giardino Pubblico, its public park. Milanese families love the park for its mini-train and the dinosaur bones in its natural history museum. The park was recently renamed after journalist Indro Montanelli, famous for his books, essays and articles about Italy’s 20th century and his fierce anti-communism. Like me, he loved the Giardino Pubblico. I often saw him walking slowly with a cane — left-wing terrorists kneecapped him in 1977 — as I took my children to play. I now take a dog to play, and I still enjoy the magnolias in bloom (or profit when — conveniently around Christmas-decorating time — the gardeners trim the park’s pine trees and leave the discarded branches in easily-picked piles).

Milan’s old, single-car trams are legendary (and are the subject of a popular Ikea poster), and I’ve always lived on a tram line. I haven’t even left yet and I’m already feeling nostalgic about the friendly glow of their night headlights and the sound of the clatter as they rounded the curve under my bedroom window.

Milan’s characteristic paving stones — pavé — provide rumbling bass line accompaniment to the sound of revving car engines at the busiest times of the day. I always loved taking a taxi at night, when the contact between tires and stones made for a ghostly echo that rose above the sounds of cars themselves. I will not miss pavé while riding on a bike. When wet — or combined with tram tracks — a sudden slip could shatter limbs, or worse. Even the best relationships have their rough patches.

Overall, my love story with Milan may seem unexciting. But sometimes romance is less about love than years well spent. I had many.

— The author left Milan to return to the United States in early July.