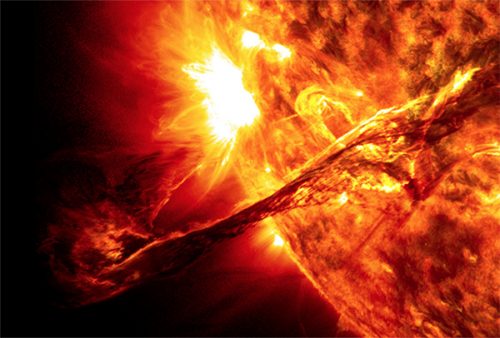 "You are only with me, but I am not only with you. I am there," he pointed to the fiery face of the sun…

[dropcap]T[/dropcap]he next thing she knew, Dot’s stomach dropped as the elevator began to ascend. She thought it was an elevator, but wasn’t sure: it wasn’t inside a building and rose up into the air as if by magic. It was curved like a capsule, walls and doors made of glass, the floor of linoleum, the ceiling shiny chrome embedded with tiny lights, so she couldn’t see if there were cables connected to the elevator. They were now at eye level with the tip of the antenna that topped her city’s tallest building, and rising fast.

Maybe they wasn’t the right pronoun though, Dot thought as she eyed the creature who stood across from her, who in turn was staring closely at her, eyes protruding like binoculars, colored lights flickering behind crystal prism lenses. Its body, covered with a thick grey hide, was mostly inert. The most human thing about it was that it stood upright on two legs and had two arms.

“Yes?” the creature asked in a gravelly, barfly voice.

“Who are you?” Dot demanded.

The creature shrugged, its sloping shoulders surging up like balloons suddenly inflating. “You know who I am.”

“How did I get here?” Dot asked, pressing a hand against the curving glass as the elevator entered a cloud that swaddled everything in fluffy white light.

They emerged from the cloud and Dot stared down at her neighborhood laid out below. “I came back to my apartment from Moe’s Café with a bagel, coffee, and the Sunday paper,” she recited slowly, trying to concentrate, but other memories kept intruding, zizzing in her brain like competing radio signals: kittens squirming in her arms after Nosey gave birth on her bed; the glossy red lips of Miss Winger, her glamorous but cruel fifth grade teacher; the wail of the ambulance siren as it rushed her to the hospital after she sustained a concussion in the soccer state finals; the boozy taste of Joey Janotta’s tongue during her first kiss; tripping in her high heels as she crossed the stage to receive her college diploma… “I read the front page but can’t remember anything after that.”

She could now see the entirety of her city, a scab of asphalt, glass, steel and concrete surrounded by green.

“That’s fairly typical,” the creature rasped. “Do you remember that the sky was darkening with rainclouds?”

Dot nodded. Yes, now that the creature mentioned it, she did. “I decided to go out for a smoke before the rain came,” she said slowly. “I went out onto the fire escape.”

She could now see the entirety of her city, a scab of asphalt, glass, steel and concrete surrounded by green.

“It took me three or four tries with the lighter because of the strong wind, but I finally succeeded.” Dot inhaled deeply, reliving the ecstatic rush of smoke to her lungs. “And then…” But there was nothing more. She shook her head.

“You got struck by lightning,” the creature explained. “Sitting there on your wrought iron fire escape. You died instantly. No pain, no suffering.”

The creature stretched a small hand, the fingers floating like jellyfish tentacles, inviting Dot to consider the evidence. America was now but a continent, a weal of geologic ridges gashed down the left side like a thick scar.

“That’s impossible! I can’t be dead yet! I haven’t picked up my dry cleaning! I’m going to see U2 next month! I just earned a free coffee on my loyalty card at Moe’s Cafe!”

Again, the creature shrugged, his shoulders swelling and deflating.

“All those things I meant to do!” Dot babbled. Below, Earth glittered emerald and azure. “Like apologize to Lindsay Tucker for stealing her boyfriend back when we were best friends.”

Her voice rose, “I still need to return that $200 I borrowed from my sister.”

“OK, so stole. And let her think that it was the neighbor boy.”

Venus and Mars floated into view. “And I haven’t reconciled with my dad. I always meant to. He’s a vile man, leaving my mom for his teenaged receptionist, but I always planned to forgive him. It’s cruel to leave him thinking I hated him.”

“You did hate him,” the creature murmured.

The entire solar system floated around them like brightly colored pearls. “Who are you anyway?” Dot demanded.

“What do you see? I’m asking seriously, because each person perceives me uniquely, so each manifestation of me is like a fingerprint.”

“Oh, God,” Dot groaned, sliding down against the glass.

“That is a name some people give me,” the creature agreed.

Dot shook her head. “This must be a bad dream. God would never waste his time escorting me to heaven. He’s got better things to do.”

“You are only with me, but I am not only with you. I am there,” he pointed to the fiery face of the sun, “and there,” another tentacle-like finger floated towards Earth, now small as a pea, “and there,” a third rose straight up to whatever lay beyond. “Do you believe?” The creature’s eyes twinkled. “If you believe, say yes and this can all be over.”

“What makes you think you’re going to heaven, anyway?” the creature chuckled as the elevator plummeted through the Milky Way.

About the Author: Alice Stephens

— Alice Stephens reviews books and writes a column for the “Washington Independent Review of Books” titled “Alice in Wordland.” Her debut novel, Famous Adopted People, is forthcoming from Unnamed Press in winter 2018.