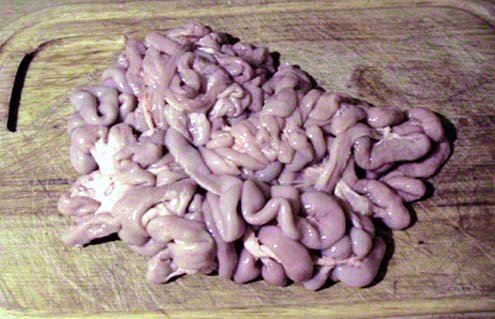 efore major battles, ancient Roman generals turned to oracles in what amounted to a ritual merger of superstition and gastronomy. The oracles didn’t seek wisdom in deep reflection or prayer. Far from it. Instead, they depended on signs divined from the entrails of large animals such as calves and steer following ritual slaughters.

In ceremonies handed down from the Etruscans, animal entrails were removed and probed for clues to the future. Based on the reflexes and markings of specific organs, including the liver, heart and intestines, the oracle scouted out what lay ahead and reported back to the commander.

After the rite came a banquet in which entrails — known as offal — were cooked. Though more refined meat cuts replaced offal over the centuries, Roman cuisine never fully severed its ties to an animal’s so-called quinto quarto, or “fifth fourth,” its intestines, head and tail. Trippa, tripe, is a good example.

But perhaps the most celebrated (and off-putting) dish based on offal is “la pagliata,” or pajata in Roman dialect, made from beef, veal and lamb intestines stewed in its own “chimo” (a creamy compound of coagulated foods that’s extremely high in enzymes).

The dish is kin to pig “chitterlings” in England and “chitlins” in the United States. When the casings are cooked in hearty tomato sauce, “la pagliata” has a soft and slightly gummy consistency and a slightly sweet and sour flavor (a bit like extra-sharp cheese). The tomato sauce compliments that.

In post-war Rome, slaughterhouse food was generally earmarked for the city’s humbler classes, including the Testaccio butchers who cut meat for the urban elite. At the time, so-called “poor” ingredients (cucina povera) were a mainstay of blue collar cuisine.

These days, “la pagliata” represents the rarest of hometown delicacies. Only a handful of restaurants and trattorias still serve it regularly. The Mad Cow (BSE) outbreak of the mid-1990s led to an Italy-wide ban on the selling and consumption of bovine intestines. But Rome chefs stuck with the dish, often replacing beef with lamb, which is what the city’s traditional restaurants now serve.

As a boy, I watched my grandfather and grandmother prepare the beef variation. My grandfather’s expert hands seemed to merge with those of my grandmother, who was his cooking partner. Like a surgeon at work, he unwound and cleaned the intestines, removing the excess fat and tissue from the organs. He’d advise my grandmother against pulling too hard on the skin at the risk of spilling the “chimo” inside. He’d then take the beef intestines in his long, thin hands and make donut-like loops — gut rings — that he tied together with string.

That was the final pre-cooking step of a recipe that’s long been a symbol of Rome working class life. La Pagliata even slipped into local pop culture thanks to a famous scene in Mario Monicelli’s 1981 film “Il Marchese del Grillo” starring the popular Rome-born comedian Alberto Sordi.

The dish outlined below, “Rigatoni con la Pagliata,” demands that you literally sink your hands into the underbelly of Roman culture. It’s admittedly not suited to all tastes, but the results are well worth exploring for a cook interested in tackling new ground.

Getting clean intestines isn’t easy. Your best bet is to ask a trusted butcher to prepare it ahead of time. Remember that you’re looking for intestinal casing still rich in flavor-laden “chimo.”

If you decide to make it by yourself, get a sharp knife.

As for wine, try a dry red — “Rosso di Montepulciano,” for example.