Give me my heroes 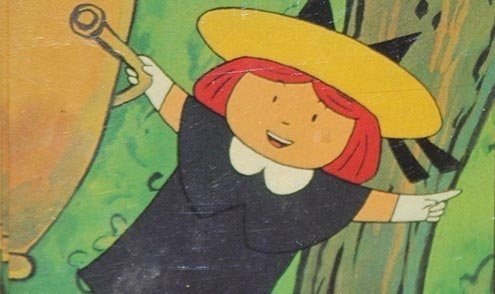 Madeline: Not your average superhero.
S

ometimes the darkness of anxiety falls so fast there’s no time to react in defense. It can invade like a wave of storm troopers from every direction. Drag you down like a shark as you’re placidly swimming naked in the sea after a night of fun. Pull you back, screaming, into its closet, and remind you that you never really left.

While anxiety may have a clear medical definition that I am not able to relate to you here, the word itself has become something of a catchall for a range of emotions. What some people used to label as nerves (“it’s his nerves”) or New York City favorite agita (“this situation is giving me agita”) or moodiness (“stop being moody!”), the word now embraces all kinds of symptoms that eat us up from the inside out. The current state of global tension unquestionably stretches a tripwire for us. It takes only the smallest blip on the screen of life to induce anxiety. Or, in this over-connected age, sometimes it’s the absence of any blip at all.

Those of us who walk through life vulnerable to anxiety need mantras and reset buttons. We need phrases or touchstones that we can turn to re-center us. We need the ability to see not just the forest for the trees but actually decipher which trees are deciduous, which are autochthonous, which have an illness, why they are sick, and how to prevent that illness from spreading and infecting other trees. We need to understand our weaknesses — not kvetch about them, not yak about them, or rail against them. We need to learn how to deal with them. We need to be superheroes.

The other day I came across two books that I’d long ago forgotten were on my shelves. (Bliss is when, for seemingly no reason at all, the title of a book in your shelves catches your attention, and you realize its pages have been absent from your life for too long.) Ostensibly, both are children’s books. But they are so much more. They give me my heroes.

Ludwig Bemelmans’ “Madeline” is one of them (the first book was published in 1939). Raised in a school alongside 11 other little girls under the governance of a nun, Madeline defies the platitudes of bourgeois society: she is a risk-taker, non-judgmental, and courageous. She has verve. But just like any other hero, she is tested. And in this story, she is tested by bodily pain. Acute appendicitis makes her human; her appendix is her Achilles heel. She could have died but is rushed to the hospital and given care. She recovers. But not only does she recover, she becomes stronger: she discovers an understanding of her body (the pride in her scar) and acquires a sense of imagination (befriending a rabbit on the ceiling). These insights can only come to a person who has been through a heavy ordeal.

I also found by Raymond Briggs’ “Ug: Boy Genius of the Stone Age and his Search for Soft Trousers” (2002). This is another book that takes me beyond the page. Ug’s tenacious curiosity undermines the dominant values of his age. As the title suggests, he yearns for pants and blankets that are not made of stone, for food that is not raw and cold, he wants things that are “nice” — to others he appears absurd. He wonders about the age he lives in; he wonders how long an age is. He wants more from life. He’d like to bring fire into the cave, to bend the stream with a “nice little landslide,” to create a pen for animals. He would like to leave the cave, and Platonically rise from discomfort into the world mind. His mother swears he will go crazy, and end up painting on walls, which is how the book ends.

The stories of Madeline and Ug teach me that even the strongest, most likable figures are vulnerable to pain, self-questioning, dissatisfaction. Their lightness and intelligence lead them out of the darkness of anxiety and into a world of imagination and gratifying creativity. Madeline and Ug are superheroes who are also very, very real.