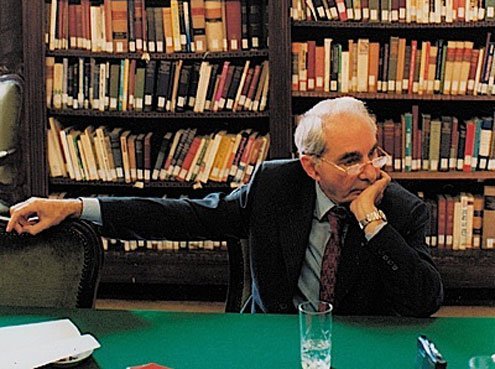 Among Italian center-left politicians, former Prime Minister Giuliano Amato is widely considered the most sympathetic toward the United States and its policies, although he has been a critic of the Bush administration and its policies. Amato, a Socialist, ran the Italian government from 1992 to 1994 and again briefly in 2000. He now heads the Center for American Studies in Rome. He chatted with Amy K. Rosenthal in Rome and Turin. These are excerpts from their conversations. Editor’s note: In May 2006, Amato was named interior minister in the Romano Prodi government.

Where did you study in the United States?

Columbia [University], but I was in Cambridge [Massachusetts] in October and they gave me this nice pen. (Amato pulls out a pen with a Harvard logo.) The following week I went back to Columbia and told them, ‘But you never gave me a pen like this.’ You see, this is competition.

Do you recall those American days well?

Recently, I visited the John F. Kennedy library [in Boston]. It is a museum full of pictures, songs, and television reels on Kennedy and his life. While I was there, I thought, this was me and how I understood the world at the time. I was at Columbia University in New York during the early years of the Kennedy Administration. While in the United States, I had the opportunity to go to Washington, D.C., and meet Robert Kennedy. This was one of the great episodes of my life. That period was characterized by a great cultural transformation, especially by its youth. My generation likes [Bernardo] Bertolucci’s film “The Dreamers.” Just hearing the song “La Mer” and seeing the film’s protagonist’s dance to that song produces a strong emotional reaction in me.

Turning to the war on terrorism, how will U.S. efforts in Iraq be perceived in light of unrest and the failure to find weapons of mass destruction? Tom Friedman of the New York Times calls it “the right war for wrong reasons.”

It was not a “right” war. Although I’m not against the use of military force when it’s needed, I think that we have to be clear with the world and with ourselves on the reasons that may give us the necessary legitimacy vis-à-vis the international community to do so. Let’s say we’re going there because there are weapons of mass destruction, and then it comes out that there were no weapons of mass destruction. Well then, the war cannot become right if it was wrong.

Some say that because of the timing of the 2003 Madrid bombings, the Spanish Socialist victory was one for al Qaeda. Agree or disagree?

No, I really disagree. This is something that in democratic terms I really reject and don’t accept.

Then, do you consider it a victory for the left?

Editorials in Europe and the United States have taken to calling al Qaeda nihilists. Is that how you see it? Or are these the 21st-century version of the medieval crusades?

No, this is something that would really give al Qaeda a more noble sense than it deserves. Al Qaeda is very much a political movement. They don’t want modernization to take place in Islamic societies. They understand that should democratic patterns take root in their societies, the kind of religious and economic control that they are interested in preserving would diminish. Therefore, this is a great political-style movement that is fighting, in terms of its own self-defense, against democracy. This is the only thing that the neo-conservatives have understood.

What could Italy do in order to increase its own national security?

A lot of things. First of all, but this is something that is taking place on the European level, is to have coordination in terms of intelligence and police measures. This is an aspect that all our countries, I must say, are doing. However, should the actions of the terrorists go beyond bombings and instead, towards biological weapons, I wonder if we are ready to prevent these kinds of things. I am not sure whether Italy is doing enough because I lack the necessary information. This for me is a question mark.

Some say the world was more “stable” when it had two superpowers, Russia and America. Are you “nostalgic” at times?

It was obviously more stable, true. But I’m not nostalgic.