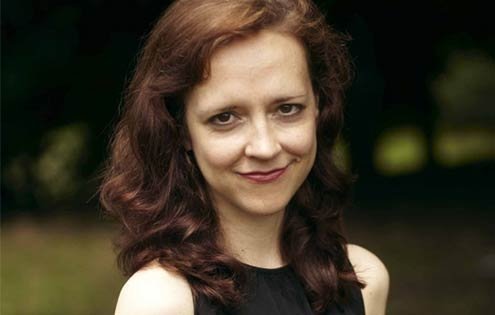 New Squad Coach Colette French kicks a bucket over the gym floor at her cheerleaders. Her eyes flip over the phones in their palms; her toe points toward he bucket. Pearled pink, neon blue, rhinestone crusted: one by one, their old lifelines clank into Coach’s bucket.

“Things are going to be different from now on,” she says.

As much threat as promise.

Abbot shifts into gear from the prologue. In the first, three pages, her 16-year-old cheer-narrator Addy Hanlon recalls how she came upon the dead body. This introduction to violent death won’t resurface until mid-story, but it establishes, face on, this writer’s deeply layered narrative intent.

A tight plot of deceit and intrigue swirls as Addy perfectly replicates teen voices. The harsh, private codes in their speech and the bleak accounts of their vacant homes. She exposes the darkly amorphous adolescent hearts of her cheers.

As she, and they, wait “for something — anything — to happen.”

What they share is need. “We will die for you,” is their favorite cheer. Shouted into the stands, “Die for you!” is addressed to the crowd. Coach will give her cheers that chance.

Until her arrival, the herd’s stuck in a static smoldering script. Squad Captain Beth Cassidy feeds on sado-domination and sexual innuendo. “Girl has such a hard-on for you,” a cheer tells Beth’s faithful lieutenant Addy.

Coach Colette is the catalyst who’ll turn the sloppily disciplined girl squad inside out. Save for dethroned and virulently vengeful Beth, they’ll follow where she leads. She’s 26, and their first plausible role model. Like them, she’s a jock, but with a real, adult life. She has a job, a house, a husband and a child.

She creates pain so bad it’s a pleasure, as she pushes their “furry, soft, little-girl bodies” inside out, forging steel hard and perfect shells. She’ll prod them to death-defying stunt perfection, which goes to the title: “Dare Me.”

Surprisingly, tough French also smoothly insinuates herself into the herd, as an after-school friend. Even if there’s a decade of age difference between Coach and charges, nobody — except Colette’s husband Matt — worries about that. Colette is too emotionally needy to listen to his advice, or even to tend to their three-year old daughter.

Through her, the teens are carelessly introduced to grown-up male chums: the Army Guardsmen who run the recruiting desk in their school hallways. Soon, all their out-of-school lives will intermix.

Because Addy and herd are passing through that period when molten passions can be shaped by anyone who seems to care for them. With rebellion and rage as heir only calling cards, these still-virgin girls call themselves “bitches,” “by-otches.” For, “We are not THEM.”

Not the “tomb of a school.” Not those invisible parents, drunk or prescription-drugged.

If these girls don unnervingly tough persona, they are still kids groping for identity in a landscape without road signs. They’re too inexperienced to read Colette for what she is: a woman not slowly coming apart. She’s ultimately dangerous. Not just to herself.

And danger is what consistently speeds Abbot’s tension-coiled plot. At mid-novel the cheer tale and its mystery of growing-up finely entwines with anticipated noir. Addy’s prologue of violent death reappears, recalling once more the body of Colette’s lover, recruiting Sergeant Will, the guy with his good-looking face shot off.

That scene segues into a brutal, murder investigation. Which Involves: the teen cheers; Colette, Will’s lover; her husband, Matt, And Abbot’s deftly parsed subcast of those late-20s soldier boys, whose own precariously-fixed adult lives became entangled with the squad world.

Watch this blend of panty-flashing teen cast and noir develop into a compelling plot combination. Certainly Abbot has the CV for it. A four-time Edgar-awarded mystery writer, her recent, fifth fiction examined adolescent desire and adult complicity. In this, her sixth work, she skillfully inserts dark murder in a story of teen character thwarted, abetted, and abused. By adults.

From them, the young teens learn the value of cold, cynical narcissist… survival.

There’s bitter, jolting realism in Abbott’s novel. It’s a fresh, disturbing take on the classic coming-of-age tale. And a keen look at the way our young women live, and survive, in the world we’ve made for them.