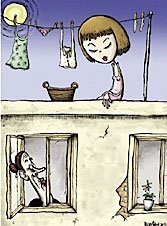 wo summers ago, under the blistering sun, I didn’t try to kill myself. Some people disagree. Instead, as I recall, I hauled a load of whites onto the communal roof terrace of my Testaccio apartment. A wall of heat rose up from the stone ground and I looked out onto the antenna and telephone wires blurring and melting into one another. I grabbed the socks, pillowcases and T-shirts and took pleasure in the simplicity of what had become my somewhat insular and self-sufficient Testaccio existence.

Across the river, Trastevere could have its high rents and quaint streets so charming to other Americans. I chose the edgy zona where the local soccer team’s spray-painted colors created a somewhat urban backdrop and where new clubs raged through the night. We boasted the best fresh-food market, famous traditional cooking and self-proclaimed “real” Romans who take pride in being so.

That day as the sun bore a hole in my shoulder, I even appreciated the rage my barista displayed against strangers, the old women who smoked themselves gray for endless hours in the green patches of Piazza Santa Maria Liberatrice and snubbed me when I tried to be engaging. Ragged, leashless barking dogs made me laugh.

My apartment, built long after the glorious architectural achievements of Rome’s ancient, medieval and baroque periods, had more of a tenement feel — function over form.

Our kitchen opened onto a courtyard and corridor where people passed en route to the elevator. As my roommate and I cooked dinner with the windows open, neighbors (many of who seemed to have debilitating ailments) peeked in and commented on our meals. Harmless enough, we agreed, until they coined us the lascivious Americans.

At that time, I crawled into bed at around ten and read an Italian version of Harry Potter. To my delight, I sat with a pen translating words like “whisper” and “broom.”

Conversely, though, indecipherable screaming and crying fits randomly pierced the thin white walls from the adjacent apartment at all hours. We invited an Italian friend over to eavesdrop and decipher the tortuous sounds. He put his head to the wall and the Morse-code translation read like this: “Legs, pain, baby, dishes, television, brother?” Summoning the strength of the boxer-shorts man, I went to the apartment and knocked.

“Non possiamo andare avanti cosi,” I informed the woman. Her eyes — which seemed to be infected — stared back at me vacantly, admitting nothing.

Those images filled my head that day as I finished clipping the last pair of socks onto the line. A small price, I thought, to live in a place so “real.” I chuckled to myself about the benevolent bedlam that had become my home. Moved by my happiness and tranquility, I sat on the terrace ledge, contemplating my personal relationship with a place claimed by many others. I perched there for five minutes, let the sun burn my freckle-prone skin and smoked a cigarette. My feet dangled on the safe side, and then I scooted off and walked back to my apartment.

Being in a fabulous mood, I decided to cook zucchini. The olive oil sizzled and the thin slices of fresh vegetables floated as they cooked. Starving, I almost didn’t see the police officer staring at me from my kitchen window. He leaned his head in and began to speak in a low tone. I thought he was asking for directions. I put on my sweet face; prepared to say “dritto,” the only word I ever used for directions.

“Were you on the roof terrace?” asked the police officer, in Italian.

“Yes, I do the laundry,” I answered him nervously, in my pathetic Italian.

“What were you doing on the ledge?” he continued, insinuating some kind of crime.

“Did you try to commit suicide?”

“Are you sure?” he persisted.

So befuddled, I had to think about it.

As I was not contemplating the end of my young life, people in the piazza saw a figure on the ledge poised to jump. They called the police. And the fire department. And social services.

This all happened as I sliced my zucchini.

For this, probably, the police officer didn’t believe my strong, clear perfect Italian “No.” He asked for my passport. I dug it out and handed it to him through the window. My zucchini burned.

The police officer left. Two hours later, our landlord appeared. We opened the door and I saw a man jumping out of his skin. “I can’t take the risk of having you here. You’re a liability, you have to leave,” he informed us. His panic and anger surpassed any concern for my alleged fragile state of mind. I felt hurt.

All the faces, the boxer-shorts man, the conjunctivitis eyes, my rage-aholic barista, and the gray smoky women across the piazza, spun through my mind.

They had ratted me out.