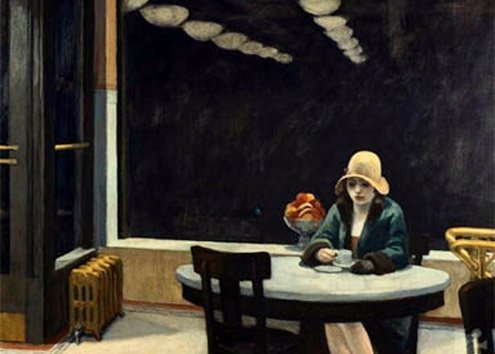 Detail from "Automat," by American painter Edward Hopper
B

usiness or pleasure?” I looked up from my thoughts, startled. “I’m sorry?” My waitress smiled patiently. “I said, are you here for business, or pleasure?”

“Oh,” I said, and then gave my standard answer, particularly appropriate for a travel writer away from home: “A bit of both.”

“Well, bon appetit. Enjoy the tasting menu.” She moved to the next table, where a British couple spoke in low voices and occasionally glanced in my direction, as if afraid I was eavesdropping.

My traveling alone, it seemed, made everyone nervous — except for me.

As a birthday gift to myself, I’d decided to spend five days in Lisbon. “Che bello! Con chi vai?” friends asked me before I left. “Who are you going with?”

“Davvero?” One friend smiled mischievously. “Are you sure you don’t want company?” he asked with a wink. “I could make the sacrifice….”

“I’m quite all right,” I said, laughing.

And I was. It wasn’t the first time I’d traveled alone, although it was the first time I was traveling alone purely for pleasure. And while I’d never been to Portugal, Lisbon didn’t seem particularly intimidating. I had, after all, moved to Rome without knowing the language or having any idea how my life would take shape once I arrived. Compared to that, five days in another European city seemed easy.

Not everyone agreed. “So you’re still going to Lisbon alone, for fun,” my mother said, a few days before I left. “Yes,” I said. There was a tense pause. “Mom, are you trying to tell me not to go?”

“No, of course not. I’m just trying to tell you not to be stupid about it. Make sure you make that emergency card with all of your medical details, okay? And don’t put it in your wallet. Put it in your pocket. In case your wallet gets stolen.”

I tried, and failed, to repress my transatlantic eye-roll. My mother might have been the most concerned about me. But she was right about one thing: Young woman traveling alone stand out.

Even when I sat down for a tasting menu at one of Lisbon’s trendier restaurants, the fact that I was there by myself had to be clarified by the management — three times: when I asked for a table, when menus were brought, and when the places were set. At the end of my meal, the sommelier told me he’d been very curious about why I was eating alone. I was tempted to come up with some romantic story. It was supposed to be my honeymoon, but I’d been jilted at the altar. Or I’d been abandoned by my (apparently Portuguese) mother at birth, and had come here to find her. Instead, I found myself brushing it off with a truth that was equally partial, if less romantic. “I’m here because I’m a travel journalist,” I told him.

It wasn’t the whole story. But I knew it was easier than trying to explain the adrenaline rush of touching down in a new city, alone. Of being able to fully experience every moment, undistracted even by conversation with a companion. Of knowing that, even to get from point A to point B, you had only yourself to rely on.

Then there was the other aspect of traveling alone that I always found hard to express to others — even, ironically, to people who had struck up conversations with me just because I was by myself: that when you’re alone you’re most connected to the places, and the people, around you. Travel in a group or as a couple and interaction among locals or other travelers is often confined to asking a concierge for directions. Not so if you’re by yourself.

The downside is the scrutiny. Halfway through my tasting menu, surrounded by tables of couples and friends, I felt slightly uncomfortable for the first time.

Which is when someone called over to me from a table of cheerful Canadians I’d noticed earlier. “Hey! Would you like to join us?” It was a woman I’d crossed paths with on the way (of course) to the ladies’ room. I smiled. “I don’t want to intrude.”

“Not at all! Come sit!” She gestured at the empty chair across from her.

I sat. I learned that my new friends all hailed from the same town. Despite the group’s size, they somehow managed to travel together often. They, too, seemed taken aback, but also charmed, that I was alone. The woman who’d invited me over had a daughter visiting Paris, also by herself. “You remind me so much of her,” her father marveled. “And when I saw you, I thought to myself, I hope if my daughter’s eating alone in a restaurant, somebody asks her to join them.”

As we chatted, my server approached my new spot. “Will you be finishing your meal here?” she asked. I looked at my companions, then back at the waitress. “Yes,” I said. “I will.”

“Good,” she said. And there I was, surrounded by new friends, one I would never have met — had I not decided to travel alone.