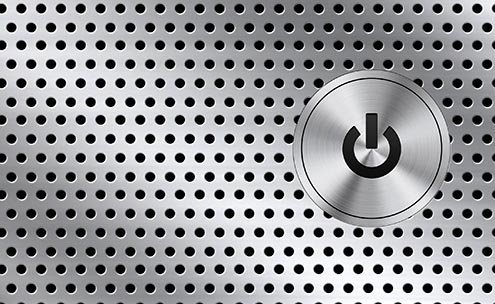 Steve Jobs preferred avoiding "on" and "off," for good reason.
U

nlike most women, particularly those who breeze through life without even bothering to check their shoes before walking into someone else’s home, my world doesn’t rotate around “likes.” I don’t post online pictures to gratify my ego.

When you don’t really feel part of a social network, seeking approval from its members has a net worth of zero. Yet there’s one aspect of social media life that admittedly drives me crazy. He never clicks on my pictures.

I mentioned this to Daniel one night after dinner.

”So, I posted a photo, and one guy called me princess, another guy said I looked regal, and what does he say? Nothing. I don’t even get the satisfaction of a ‘like’ or even a couple of words telling me how great I look.”

As always, Daniel was quick on the pickup. “Listen Miss Countess,” he laughed. “Can I light up in here or will someone bust in and arrest me?”

I shot him my “don’t mess with me” look. Open the window, I told him.

“The photo thing bothers me because it’s a matter of pride,” I continued. “I know he’s looking. I know he likes me a lot. What would it cost him to let me know? It’s nota as if Steve Jobs deprived him of the means…”

Daniel mulled this over. “That’s true. Jobs had a weakness for beauty. He was probably thinking of you when he designed the MacAir.”

I was in a funk and I knew it. He — let’s call him Giorgio — was leaving for Berlin the next day.

But Daniel was having none of my moodiness. “Sweetie: he’s an architect. Remember that. For architects, beauty’s an enchantment you take in from a distance. What really matters to them are solid foundations.”

Stop the presses: Daniel had finally uttered something wise.

Giorgio is strange and fascinating to me in that he comes at things obliquely. He circles around them. Being free matters to him. He doesn’t want to be captured. He needs to stay grounded at all costs. He’s passionate but rational, innocent but dangerous, self-confident in person but otherwise shy. He’s rum and Coke: he seems light enough but eventually you get drunk on him.

Chance had nothing to do with how we met. I don’t believe in it.

We met because we wanted to. We were curious about each other. When it turns out two inquisitive people actually end up liking each other, people always manage to say it’s the work of some bored divinity eager for entertainment. Spare me.

Things happen because people want the to happen. Sorry, Zeus.

So we made love. I was in disbelief. And it didn’t take long before I called Daniel.

He listened and chortled. “Right, if that’s what really happened then I’m a straight guy.”

“No, Dany, I swear. That kind of thing has never happened to me before, that kind of connection. I get goose bumps just thinking about it. It really and truly just doesn’t happen…”

“Give me all the juicy details.”

I saw Giorgio again the next day at a cousin’s 18th birthday party. I’d gone with Daniel and it took one look around to peg the average age at about 20. I sat down at a table near the bar. From there I could watch the party-goers file in, a rite-of-passage parade of bored-looking girls decked out in high heels, short skirts, long skirts, red lips. They scanned the room with world-weary eyes.

Daniel and were busy with our mojitos when two the crash-and-burn girls nestled up to the bar.

Both were staring down at their phones. One made a comment about a boy in corner. All pretty normal stuff until she said, “If it were up to me, after what he said, I’d just hit the ‘off’ key and go to bed…”

As he got sicker from cancer, Steve Jobs gave a series of interviews, and someone once asked him if he believed in the afterlife. He said he did.

He hated the ides of death, basically because it made him think of the “off” key — “click, and you’re gone,” he said, gone as if you’d never existed. “That’s why I don’t like putting on-off switches on Apple devices,” he said.

These days, we’re probably so tied into our devices we probably think both lives and relationships have on-off keys. Press “off” and you can make a problem go away.

Mulling it over, I suddenly realized why Giorgio wasn’t clicking on my photos. He didn’t want to set foot (not even a toe) in the churning “look at me!” world of likes and chatter and swirling vanities. It just didn’t matter to hum.

From my end, anything he’d say about me would matter, a lot — but only to me; only in my own head. His virtual imprint would be no more or less important that so many others, everything said in passing, because that’s the way it works, and that’s also what he wanted no part of.

What it boils down to is thus. He already has my complete attention, and he knows it. The question is do I have his.