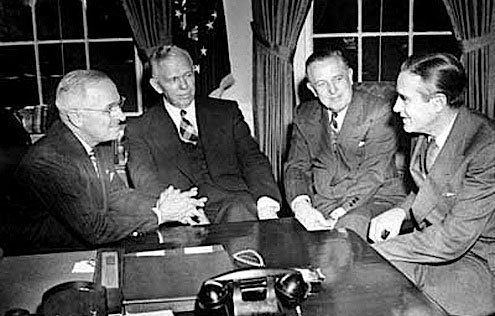 When America could talk: George C. Marshall beside Harry Truman in 1948
G

iorgio Cappon was a capable, honest and decent man from what is known appreciatively as “another generation.” Often, he’d challenge me cheerfully with this question: “So what are they saying about Bush?”

The “they” to whom he referred wasn’t defined. It rarely is in Italy. It can mean the public, the press, or just the makers of buzz. But in most cases the question is merely an inducement to deliberate.

For all the times he asked me about Bush, I never answered effectively. I wandered. I was sentimental. I lost my way in his language, Italian, which I speak honorably, but no more.

The last time the Bush query came up, when I met him by chance at a doctor’s office, I told him, “Whatever happens, they will re-elect him.”

To which Giorgio Cappon, an unyielding pragmatist and skilled banker, answered, “Really?”

Well, no, not really, but what else to say when viscera runs high?

You gird yourself for the worst.

Which is when you get the worst.

He leaves behind three remarkable sons, my friends, and their families. He leaves behind much love, sometimes a bit rough around the edges. Cappon, who once ran IMI (Istituto Immobiliare Italiano), liked hard work, structure, professionals and professionalism.

These are rare qualities in a nation where all forms of seriousness are both approximate and perishable.

Cappon was hardly a liberal. He came up through the banking ranks when Christian Democrats ran the country. He understood money, capitalism, and enterprise; and perhaps because he knew to navigate amid corruption and envy, but not yielding to the meanness of either, he drew the wrath of those who thought he should be like them – buyable. He was not.

For decades, Giorgio Cappon was to me little more than the tough father of dear friends. In the 1970s, when I first met him, he was powerful and unapproachable, a man without a public smile.

But when I met him years later as he pushed into his seventies, he had warmed into a grandfather who refused not to laugh, extending palpable affection to others. The transformation, perhaps late, was nonetheless impeccable and genuine.

And my answer about Bush, while certainly late, is no less genuine, for why should death rob us of a chance to answer the questions of those we respect?

What are “they” saying about George Bush?

If the “they” represents the America that resides outside Boston, New York, Washington, Los Angeles (and away from hamlets of academic dissent), “they” are not quarrelling unduly with the president – much the way southern provinces here still warm to Silvio Berlusconi. Fear needs protectors, and fear, since 2001, has been mass-produced. National identity, in a sloppy world, needs a fist to anchor its ways and means. Bush senses himself as in charge, and among impressionable voters — those not already committed, like me, to voting against him — self-assuredness is its own policy. Pop culture, once buffeted by H. Rap Brown, The Grateful Dead and Andy Warhol, now has American Idol; university rebellion, the lifeblood of previous social unrest, has been co-opted by that most awful of words, “prioritizing,” which makes social status its own reward and assigns moral value to the things that income produces.

When brand-name shoes can be who you are the times are not subtle. The United States, while still the most remarkable social and political laboratory on Earth, remains conservative and anti-sophisticated. Indignation trumps vision because it’s easier. America can be a scary place, say Americans, but not as scary as that which isn’t of its own social skin.

My sense, reading between Cappon’s complex lines, was not that he overtly disliked George W. Bush, but that he felt let down by a cast of characters so abrasive in their instincts. Growing up with American heroes including George C. Marshall, Dwight Eisenhower (a general-turned-president who warned of the military-industrial complex), and the two Kennedy brothers, he seemed perplexed that statecraft had lost its way. He never pretended an intimate knowledge of America, and yet the current crop of management ideologues disappointed him: so oppressively rigid, so eager to conjugate fear, so humorless and bereft of wit.

What’s wit got to do with it when there’s a war in Iraq, global terrorism, when people are blowing themselves up for attention?

To lead is a privilege, and one demanding of accountability when the leadership extends — by virtue of economic power — to all segments of an ever-expanding population.

To set an example in which force is implied but not always necessary requires grace of word and deed; it begs patience and shrewdness; it counsels a sense of American leadership moored to values different from imposition; it prizes listening and persuasion above proselytizing.

Self-deprecation, knowing when to laugh at yourself, if only a little, is as necessary to a state as to a man; it can bring doubters to your side.

Giorgio Cappon learned that most human of lessons toward the end of his life.

If only I could have told him so.